In a previous post I took a deep dive into Social Security and showed how we are on an unsustainable path but I offered a solution to get us into a more fiscally conservative position.  Now I’d like to tackle another so-called entitlement program – Welfare – by again looking at the history of Welfare, describe why it is in trouble and what we can do to fix it.

Welfare was a part of our country even at the beginning as we adopted the English Poor Laws that gave assistance to those who were unable to work due to physical limitations and assistance was given to those individuals.  But starting with the Great Depression, Welfare payments increased with the passage of the Social Security Act of 1935 which included unemployment payments and benefits to dependent children.  Many Federal government agencies such as the Health and Human Services (HHS), the Department of Housing and Urban Development (HUD), the Department of Labor, the Department of Agriculture and the Department of Education were created to help facilitate this aid.

Although there have been many changes such as the Personal Responsibility and Work Opportunity Reconciliation Act in 1996, Welfare, as we know it today, encompasses many aid programs that include Unemployment Insurance, Medicaid (healthcare), Food Stamps, Child care assistance and housing assistance.

You’ll recall that President Johnson declared a war on poverty and launched his “Great Society” programs in the late 60′s and early 70′s and a summary of Johnson’s changes is provided below from the website Defense of Capitalism.

“In a speech in May of 1964, President Johnson proposed a series of “activist” government policies that would create a “Great Society” for America. He told his audience that he was determined “to assemble the best thought and broadest knowledge from all over the world to find [the] answers” to these social ills. In 1965, following Johnson’s reelection to the presidency, he initiated a wide variety of pieces of legislation to fight his declared “wars” on these social ills. Government programs and spending were either introduced or expanded in almost every domestic direction.”

We’ve had this war on poverty for many decades so let’s see how we are doing.

The Problem with Welfare 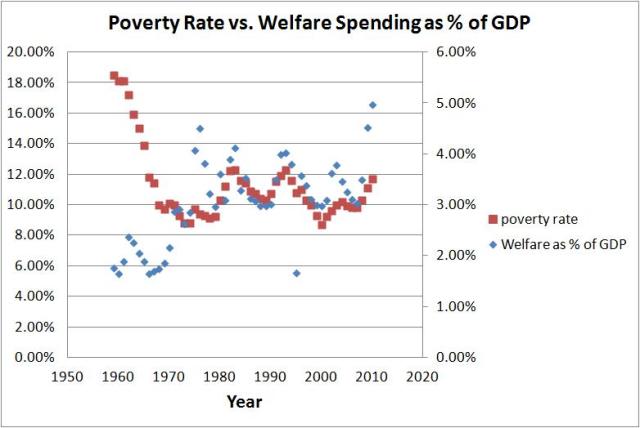 We can safely say that the War on Poverty will not be won by increasing Welfare spending.

In case you needed one more piece of evidence that Welfare is on an unsustainable course, here is a graph of Welfare spending as a percent of GDP and you can see we are on an upward trend with no plateau in site (note the trend line). 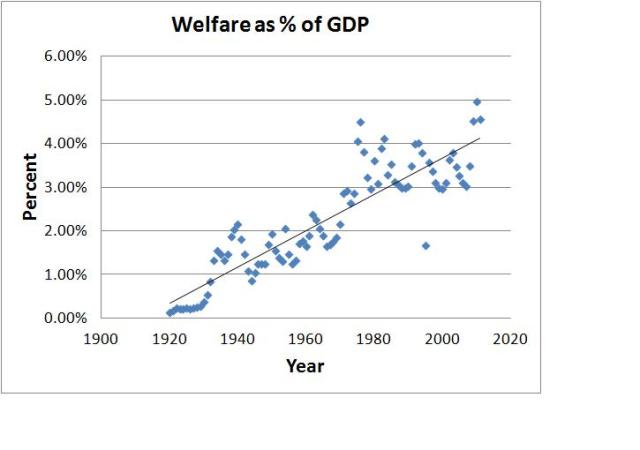 The data prove that Welfare, in its current state, is A) not effective at combating poverty and B) on an unsustainable path so now we must take steps to reform it.

Let me state clearly that I don’t believe Welfare should be totally eliminated because we should take care of those who are either going through a difficult period or have been rendered incapable of earning a living.  I am not heartless and I think a country should use tax payer money to provide for those who need a helping hand and the many programs under the Welfare umbrella do just that for honest, hard working Americans.  But as is the case with unchecked goodwill, the helping hand of Welfare has become an enabler for those to remain in poverty or worse, has provided a new money pot for unscrupulous individuals to raid (such as here and here).

Like Social Security, we can’t just cut to zero and let the chips fall where they may but unlike Social Security we can cut spending outlays to Welfare much sooner.  It would be cruel and dishonest to cut spending immediately because many families have been conditioned to be dependent on this system and before we remove the assistance to those who can work for a living, we need to provide time and resources to allow them to shake free from this government dependency.

I happen to agree with the following Welfare reform proposals from the Heritage Foundation and they are a listed below.

Get Costs Under Control: The next step in welfare reform is to control the explosive growth in spending. Once the current recession ends (when unemployment reaches 6.5%), aggregate welfare funding should be capped at pre-recession (FY 2007) levels plus inflation. This would force Congress to determine whether or not these programs further the goal of alleviating poverty.

Promote Work, Not Government Dependence: Building on the successful 1996 model, welfare reform today should continue to promote personal responsibility by encouraging work. For example, food stamps, one of the largest means-tested programs, should be restructured to require recipients to work or prepare for work to be eligible to receive benefits.

We must make sure that our Welfare outlays are means tested and are being given only to those who truly need it.  We need to put a time limit on those who are capable of work but choose to accept government assistance instead (indefinite unemployment benefits must stop).   We need to cap Welfare spending to a portion of GDP.  We need to provide incentives for able body people to get off Welfare and enter the workforce.  We should be honest enough with the American people to have a fierce conversation about how increases in Welfare spending are part of the cancer that is destroying our country and Congress needs to act now.

From this site, you can see that Welfare spending in 2011 ($472.9 billion) was 13% of the total Federal government outlays ($3,603.1 billion) and it gets worse when you discount deficit spending and consider that Welfare spending is 20.5% of actual Federal income ($2,303.5 billion).   Are we really saying that 20% of all Federal income is required to compensate the people in the US that are unable to work?

Welfare, like Social Security, is a Federal government program that must be drastically altered if we have any hope of saving the Republic.

14 Responses to Time to Reform Welfare