Liberal Policies And What Will Happen When They Are Reversed 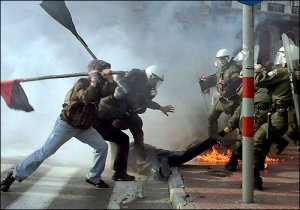 The goal of Liberal policies has never been about helping the poor but instead about getting American citizens hooked on the free government handouts and then using that group to keep the Liberals in power so more freebies can be distributed.  This is not a desired path for a country because it stifles entrepreneurship and leads to Socialism which has been proven time and time again to fail.  Bill O’Reilly wrote a piece on Human Events that states this much better than I can but let me expand on his article and paint a picture of our future as we try to correct these mistakes.

Liberal social programs really just create slaves to the government and eventually those programs will crumble under their own weight because we’ll run out of tax revenue to sustain the programs.  When an entrepreneur loses the ability to make a profit (through high taxes and over regulation) he realizes that it’s not worth the risk so new businesses and new markets are never realized.  Without innovation and new markets the economy collapses, more people lose their jobs and the government loses the ability to make payments to its social programs.  This is happening now and is a major reason why our national debt is over $14.5 trillion.

Let me state that a modern civilization should and must take care of its citizens who can’t take care of themselves.  So I’m not advocating removing Unemployment Insurance, Welfare and Social Security because these programs are needed for those who face hard times and need help while they get back on their feet.  But these programs are not being used as safety nets because Welfare, Medicaid and Social Security represent 45% of the total outlays of our 2011 budget or $2.17 trillion.  Our budget deficit for 2011 is $1.65 trillion so there is obviously no way we can sustain this level of spending and do the things that government was meant to do as outlined in the Constitution.  When our Founders mentioned “provide for the general welfare” I doubt they envisioned almost half of our Federal budget going to social programs that pay people not to work.  Something has to give and the Tea Party movement has started a renaissance in America that is slowly but surely replacing Congressional representatives with those that are committed to fiscally responsible actions.  2012 promises to provide a major shift in Congress and the White House that will give us the votes to make meaningful change and get our country back on track.

But what will happen in 2013 when the conservatives in government start reigning in spending and cutting social programs like Medicare, Welfare and Social Security?  As luck would have it, we have a crystal ball so let’s take a look at what is happening in Greece, Spain and all of Europe this year.  The governments of these countries have realized, like we have, that rampant social welfare programs are unsustainable and they are taking actions to cut those programs to save the existence of their countries.  And are the people rising in mass to say thank you and applaud those tough decisions?  No, the people who have grown accustomed to the handouts are biting the hand that used to feed them because the governments are taking it away.  The Unions and protesters are spouting the same memes starting in the US by the president and other Liberals – the rich need to pay their ‘fair share’ and we need to adopt a policy of eating the rich.  I’ve shown in another post where the rich already pay twice their fair share but that won’t stop the Liberals and their paid henchmen, the Unions, of spreading this propaganda over the coming months and years.  The little campout of rich college graduates who were too lazy to get a job, otherwise known as the Day of Rage, was only a drop in the bucket of what we’ll see over the coming 4 years as major changes are made in our government.  Be prepared and don’t be surprised.