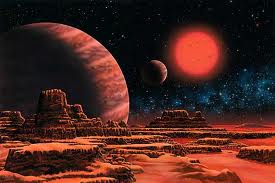 Recently NASA launched a new Mars probe called Curiosity that will arrive on the Red Planet in a little over 8 months from now.  Once there, it’ll be used to perform advanced experiments and measurements to determine if life could have existed on Mars in the recent past or if conditions currently exist on Mars that makes life possible.   And by ‘life’, I mean microbial life, not the kind you’ll find in an Edgar Rice Burroughs novel.

The new car-sized rover is very sophisticated and even generates 110W of electrical power from a small core of Plutonium (yes, it has its own nuclear power plant on board).  The plan is to have it search the planet for 2 years looking for conditions that would be conducive to life and reporting everything back to its mother planet for scientific analysis.

Delivering such a device to a planet is the next logical step in a VERY long range goal of one day delivering humans safely to the surface of Mars.  While this goal hasn’t been explicitly stated, it is what we as humans are hard wired to think about.  Exploring and Expanding is in our DNA and no matter how many budget cuts happen at NASA, the human spirit will push for us to go further into the solar system.  So as I read this story about Curiosity and watched with pride as the rover lifted off on a powerful Atlas 5 rocket, I started to think about the potential for life elsewhere in our Galaxy.

Full disclosure here – I am a Science Fiction junkie and found that this literary genre scratched an itch that I discovered in Middle School.  I read Asimov (Foundation trilogy), Arthur C. Clarke (Rendezvous with Rama and Childhood’s End) and Larry Niven (Ringworld) in high school and these books got me thinking about alien encounters and alien civilizations.  But all of these books left out key details in the science fiction topic – how we get to these other worlds and what issues will we encounter.  It wasn’t until I discovered Robert L. Forward in college with such books as Dragon’s Egg, Starquake and the Rocheworld series did I start to ponder the difficult logistics involved with interstellar space travel and communication.

Let me explain these difficulties in a real world example.  We have a neighboring star, Gliese 876, that have a couple of planets orbiting in the habitable zone.   The habitable zone describes a distance from a particular star that would provide an environment that would be conducive to Carbon based life as we know it (i.e. water would exist in liquid form).  Of course this assumes that only Carbon based life exists in the universe and while this is an interesting topic, I will not attempt that debate in this post.

Gliese 876 has two planets that are in the habitable zone and the star is located 15 light years away from Earth.  This means that photons (which travel at 186,000 miles/second) leaving earth would take 15 years to reach the planets orbiting Gliese 876.  Here are some iPad screen shots from my Exoplanet app that give further details about Gliese 876 and its 2 planets that orbit in the habitable zone. 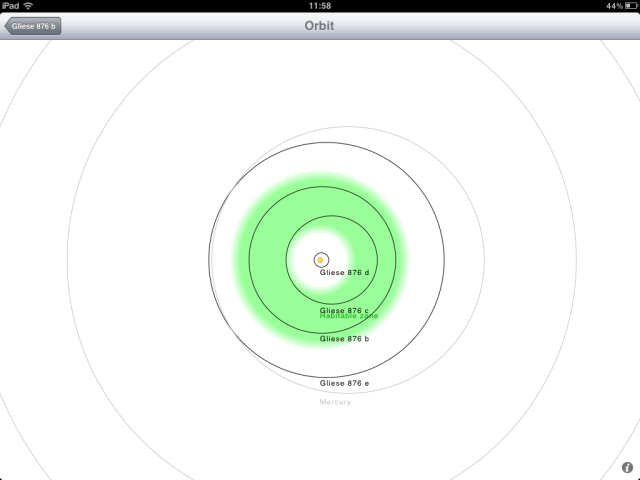 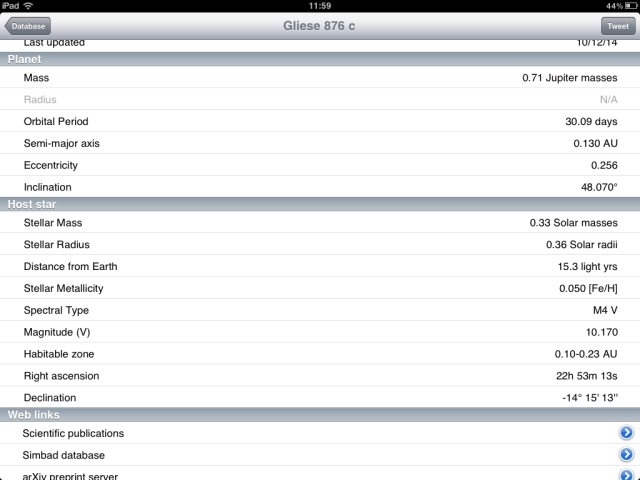 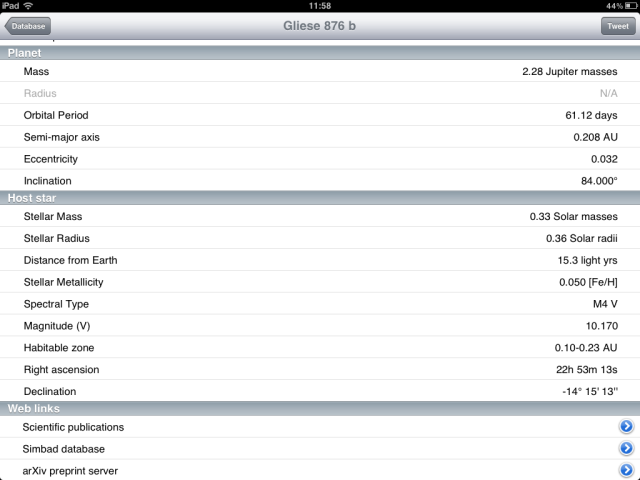 Since this star is 15 light years away, any communication we would have with its inhabitants or space ships we send to this star system will take 30 years to complete a simple conversation (1 question and 1 answer).  You can imagine the difficulty in relaying complex scientific Q&A so obviously any exploration project would have to be 100% self sufficient.  And that assumes that we have mastered travel close to the speed of light, which we haven’t, so a journey to Gliese 876 would encompass a lifetime for the first crew and would mean reproducing offspring to carry on the rest of the mission.  The best interstellar travel method we have now is something called a light sail (which was detailed by Robert L. Forward in his books) which can reach speeds of 0.1c (10% the speed of light) so it would take 150 years to reach Gliese 876.

So reaching our closest neighbor is an almost unimaginable task at the moment.  But what about ‘talking’ to those on Gliese 876?  If life has evolved on these planets and if they have advanced to the point where they, like us, broadcast radio waves out to space then we could intercept those and attempt to decode them.

But that takes time for life to evolve to that level of technical sophistication.  It took us roughly 4 billion years from the birth of Earth to now before we advanced enough to broadcast these signals to space.

But what if we did get signal from another planet?  What would that mean for our life here on Earth?

How would our Worldview change knowing that there is life on another planet?  How silly would our local wars be?  What would this mean for our religions?  Do we assume that our God would follow the same pattern of revelations on another planet as He followed here on Earth?  How would that discovery change our government structures and budgets?  Instead of Americans, Chinese, French, etc. we would now think of ourselves as Earthlings.  Would we continue to cut NASA funding?  What would this mean for advancements in Science?  I have to think that Communications and Interstellar Spacecraft studies would skyrocket to a point that would make the Dot-Com explosion seem like a blip on a radar.

This type of discovery most likely won’t happen in my lifetime but if we are smart enough to not destroy ourselves, I do believe it will happen one day in the future.  I can’t imagine that the Creator of the Universe would devise such a beautiful Universe and leave it for the exclusive benefit of a small blue planet orbiting a minor star in the suburbs of an average galaxy.

2 Responses to Imagine the Possibilities