The Federal Government is a big believer in Rule #9 in Saul Alinsky’s Rules for Radicals which states:

“The threat is usually more terrifying than the thing itself.”

And it’s not just confined to Liberals either.  I’m sure you remember this speech George W. Bush delivered in 2008 during the financial crisis and right before Congress ‘had’ to pass the Troubled Asset Relief Program (TARP):

“The government’s top economic experts warn that without immediate action by Congress, America could slip into a financial panic, and a distressing scenario would unfold:”

“More banks could fail, including some in your community. The stock market would drop even more, which would reduce the value of your retirement account. The value of your home could plummet. Foreclosures would rise dramatically. And if you own a business or a farm, you would find it harder and more expensive to get credit. More businesses would close their doors, and millions of Americans could lose their jobs. Even if you have good credit history, it would be more difficult for you to get the loans you need to buy a car or send your children to college. And ultimately, our country could experience a long and painful recession.”

“Fellow citizens: We must not let this happen.”

I hate to break the news to you but in the years after TARP was passed more banks failed, the stock market continued to drop, 401k’s reduced in value, home values plummeted, foreclosures rose, businesses found it harder to get credit, more business closed their doors and millions of Americans lost their jobs.

I’ll concede that some of the TARP money was paid back but we still have banks that are too big to fail and there is no guarantee this crisis won’t repeat itself.  Are we really better off now, long term, by bailing out these financial institutions?  I say no.

Obama’s economic team also participated in this adherence to Alinsky Rule #9 in early 2009 as they presented this chart to make the case for the $787 billion stimulus that ‘had’ to pass to keep the unemployment rate below 8%: 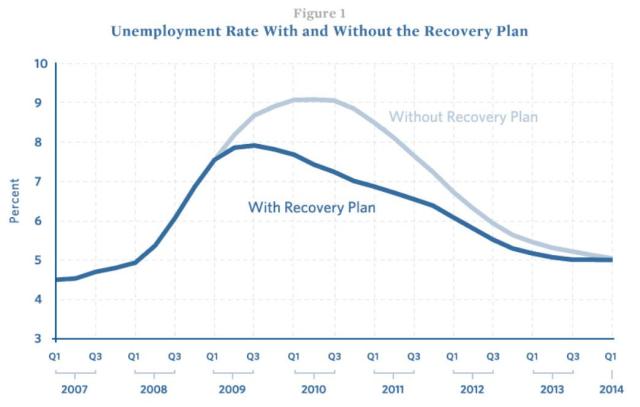 I don’t think I have to tell you how unsuccessful that program was.  Here is the updated chart with the latest BLS unemployment data:

As a Free Market Capitalist, I was against both of these measures because I felt the only way we can get out of these long term crises is to let the market adjust in the short term, take our lumps and move on to a brighter, long term economic situation.  When governments intervene to lessen the pain of a short term market correction they either fail to solve the problem or make it worse.

Romney was right that we should’ve let Detroit automotive companies go into bankruptcy, retool and emerge better in the long run but instead we borrowed money and added to our national debt to prop up these companies and their poor business decisions like keeping sweet heart union deals.

And we aren’t done.  Now the latest scare tactics from the Federal government tell us that we are approaching a Fiscal Cliff and if we don’t act our economy will tank.

You’ll forgive me if I don’t get too worked up about it.