If you are like me, a person who actually works in the real world of business, you know that there is a great deal of uncertainty right now.  How will Obamacare affect my business?  Are we poised for another recession?  Will the jump off the Fiscal Cliff put us in a Depression?  Will over regulation continue to stifle the Free Market?

All this uncertainty is forcing businesses to halt expansion and keep money on the sidelines.  This isn’t something that business wants to do because the number one goal of ANY business is to make a profit and if they can invest their capital in areas that can capture market share or innovate to find the next best widget, companies want to spend their money to do this.  But right now there is just too much uncertainty to take that risk when peoples’ jobs and livelihoods are at stake.

This is pretty obvious to most people in business but to Liberal bloggers, this is just nonsense.  From an Ezra Klein tweet:

From the Slate blog of Matt Yglesias that was referenced in the Ezra Klein tweet (emphasis mine):

“That’s why a real strategy for bringing corporate cash off the sidelines doesn’t have anything to do with tax reform (though tax reform might be nice), it has to do with monetary policy. Specifically an NGDP targeting strategy or an “Evans Rule” strategy would work on both of these dimensions. That’s because both the Evans Rule or a reasonable NGDP target amount to a promise that either real growth will be faster-than-expected or else inflation will be faster-than-expected or else both. That doesn’t give you “certainty” about the future, but it gives you a rational basis for shifting assets at the margin out of low-yield high-liquidity strategies and into more aggressive ones. That more aggressive business investment posture should, in turn, produce both more real output and somewhat higher prices thus creating a credible virtuous circle.”

“Frustratingly, if you talk to the smart analytic economists and the investment banks this is exactly what they’ll tell you we should do. But instead of talking to them, the media prefers to lavish attention on CEOs who just want what all rich guys want—lower taxes and less social-welfare spending.”

To sum up Matt Yglesias’ thesis – The FED can modify monetary policy in such a way to persuade businesses to free up some of the cash that is sitting on the sidelines.

Mr. Yglesias proposes that the FED do this by using NGDP targeting and/or the Evans Rule.  NGDP targeting means that the FED will do whatever necessary (which would include injecting so much cash into the market that we’d have higher inflation rates) to keep GDP growth at some nominal level (say 5%).  The Evans Rule, which the FED recently adopted, states that the FED will put measurable limits on its monetary policy (i.e. not raise interest rates until the US drops below a certain level of Unemployment Rate and have inflation rise to a certain point).

All that sounds good in theory but if the Market uncertainties still remain due to actions of the Federal Government, companies will still keep the money on the sidelines.  Interest rates are basically zero right now anyway and companies are still reluctant to expand and invest in new markets so I don’t think higher inflation rates would cause businesses to invest in capital when we still have this very real Market uncertainty.  In a climate where the Federal Government allowed the Free Market to rule unfettered, then I could see this theory having merits but we can hardly characterize our current Regime as pro Free Market.

I basically asked Mr. Yglesias this question in a tweet that he did respond to (sort of): 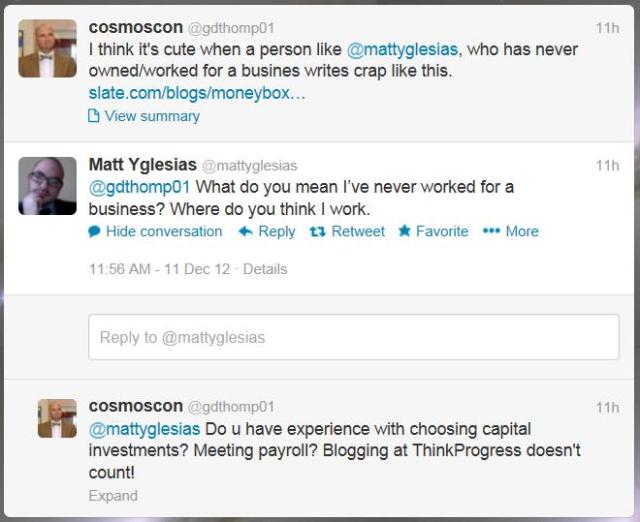 From what I can tell, Mr. Yglesias received a philosophy degree from Harvard and has spent his entire professional career blogging or writing for various websites (i.e. Think Progress and Slate).  Apparently this education and experience gives him the authority to tell the media that CEO’s are clueless with regard to running companies and are only interested in lower income tax rates.   Because, after all, CEO’s are only people who spend their days RUNNING ACTUAL COMPANIES, meeting a payroll, analyzing Market conditions, leading organizations and being held responsible for the thousands of people that are employed at their companies.

But what do they know?  Everyone knows that philosophy degrees and blogging expertise trumps all that.  Right?

If Mr. Yglesias and other Leftist academia elites think that companies are intentionally ignoring Market opportunities then they should strike out on their own, start companies and take advantage of these unmet needs.  I’ll be waiting.

This entry was posted in economics, Over Regulation, politics. Bookmark the permalink.

6 Responses to Liberal Bloggers Know How To Run A Company