Nothing New Under The Sun

Ecclesiastes 1:9 – What has been will be again, what has been done will be done again; there is nothing new under the sun.

We were putting the Christmas decorations back in the attic today (my wife does not play around – once Christmas is over, the house is back to normal) and I did what I do most times I go into the attic – look at old stuff that should be thrown away.

I’m a pack rat and love to reminisce and get nostalgic about stuff my wife says I should throw away and today was no different.  This time I opened a briefcase that had some things I kept from my 10 years I lived in Louisville, KY that contained KY Derby programs, concert tickets, pictures and newspapers.  It was the newspapers that caught my eye and started me to postpone the more important work my wife asked me to do.

The main Louisville paper is the Courier-Journal and I had kept a few issues on noteworthy days and I spent an hour or so today going through 2 issues – the one published after the great flood of 1997 and another that contained a letter to the editor that I wrote in 1996 (when I was a very youthful 27 years old).

Here is a story about the Economics and Budgetary issues facing the US in 1996:

Notice the conflicting headlines.  The Treasury Secretary says everything is A-OK but the GOP Representative Kasich agrees with the FED chairman that there is reason to be cautious.  It appears there may be some partisanship at play here.  So political differences aren’t something new?

Notice that the FED chairman is asking Congress to balance the Federal Budget.  What a novel idea!

Also notice that Kasich is recognizing that Social Security is a looming disaster and suggests lowering payments and tying them to the CPI to save $1 trillion over 12 years.  Notice that the current Fiscal Cliff “Negotiations” have talked about saving $1 trillion over 10 years.  Coincidence?

Here are some articles from 1997 about the devastating flood on the Ohio River. 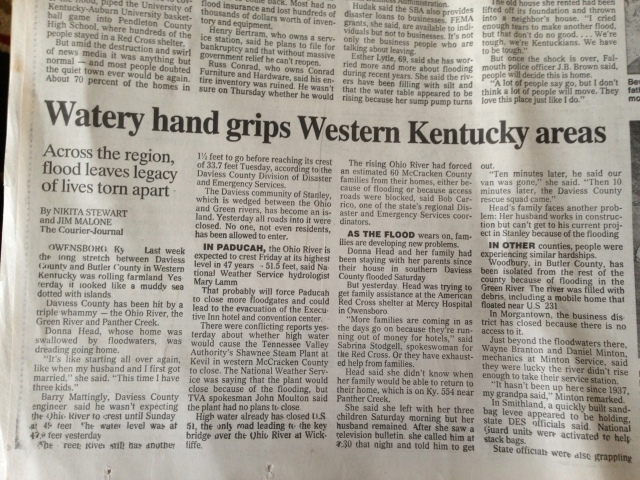 Notice there is no reference to “Climate Change” in any of these stories.  Floods happened then and they happen now and they aren’t a result of increased CO2 in the atmosphere.

In 1997 mentally ill patients were not properly institutionalized and they committed mass murders with guns.

In 1997 the Leftists in the White House engaged in illegal activity.

We now know how Eco nut Al Gore has used his influence to increase his net worth to over $100 million by peddling the Climate Change Sham and this article was just the canary in the cave showing what this guy is capable of.

In 1997 we see the Federal Government (specifically the Housing and Urban Development (HUD) department) tried to short circuit the Free Market and create Enterprise Zones. 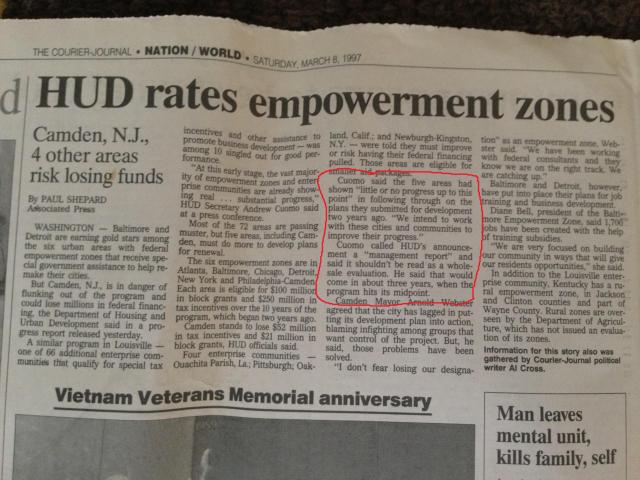 With decades of hindsight, we see how this program was not only ineffectual but highlighted the fallacy of placing our faith in our Federal Government to fix our problems.

Here is a quote from a Cato Institute study on the failures of the HUD Empowerment Zones:

“HUD’s policies played a key role in causing the housing boom and bust and then the recession in its wake. Weak lending standards on HUD-insured mortgage loans helped fuel risky non-prime lending. HUD also put pressure on banks and the failed housing giants Fannie Mae and Freddie Mac to make risky loans to underqualified borrowers. Thanks to those policies, Fannie and Freddie went bankrupt and already have received $112 billion in taxpayer bailouts.”

“HUD should be abolished. State and local governments should be left to decide what housing and community development programs they want to fund. Even better, housing should be left to private markets, which produced massive amounts of housing for people at all income levels for many decades before government encroachment.”

Is that not enough for you?  Here’s another one:

“HUD’s history of scandal and corruption fits this pattern. While government officials and advocates for housing subsidies usually paint a romanticized portrait of HUD’s programs, the truth is that federal housing intervention has often done far more damage than good. The housing and financial meltdowns of recent years can be partly traced to the distortions injected into markets by federal housing regulations and subsidies through HUD and other agencies. We have learned that when the government intervenes in the housing industry, politically driven decisions lead to corruption and economic distortion, not efficient public policies. The federal government should begin withdrawing from housing markets, including dismantling the Department of Housing and Urban Development.”

There’s even a recent study that lays blame to the housing crisis and the Great Recession on the Community Reinvestment Act.

“In the academic world, mealy-mouthed delivery of even powerful conclusions is the norm, so it’s refreshing to see authors Sumit Agarwal, Efraim Benmelech, Nittai Bergman, Amit Seru answer the title’s question, “Did the Community Reinvestment Act (CRA) Lead to Risky Lending?,” with the clear, “Yes, it did. … We find that adherence to the act led to riskier lending by banks.”

“The housing meltdown and the Great Recession. Something else for which you can thank the feds.”

Yes, there is indeed nothing new under the sun.  Like today, we’ve always had political partisanship, out of control Government spending, ignorance of unsustainable entitlement programs, weather catastrophes, evil people committing mass murders, Leftist shenanigans and Federal programs that circumvent the Free Market.

When will we wise up and recognize the wisdom of the Serenity prayer?

This entry was posted in Climate Change, economics, Over Regulation, politics. Bookmark the permalink.

3 Responses to Nothing New Under The Sun