Just who are the true deniers?

The Anthropogenic Global Warming (AGW) cult has been beside themselves the past couple of years every time a large storm or hurricane hits the US and they are quick to blame human consumption of fossil fuels (i.e. atmospheric CO2).

The latest Northeastern US snow storm is no exception and today I saw a tweet from blogger Dani1981 who writes for the AGW shill site Skeptical Science:

@gdthomp01 The word for that is "denial".

You can see my quick response to this lunacy and she responded by calling me a denier but in reality it is she and the whole AGW cult who are the true deniers.  And by this I mean deniers of history and I’ll prove this by showing record blizzards that occurred in North America before the AGW cult started spewing their lies.

“This snowstorm was so massive it became a historical event. In terms of storm severity factors, this one had it all: enormous amounts of snow, frigid temperatures, howling winds whipping up monstrous snow drifts — and a widespread area of effect that covered the entire northeastern United States from New England to the Chesapeake Bay, including major metropolitan areas like New York City.  More than 400 people died during the storm, including more than 100 who were lost at sea.”

“In 1959, a storm dumped a huge amount of snow on Mount Shasta, Calif. The 189 inches (4.8 m) of snow recorded at the Mount Shasta Ski Bowl is the largest snowfall from a single storm in North America. However, many believe that 1993’s “Storm of the Century” has eclipsed this mark in terms of the actual volume of snow, due to heavy snowfall across such a massive area.”

“This March nor’easter (a powerful storm that blows in from the Atlantic Ocean) created classic blizzard conditions throughout eastern Canada, dumping a foot and a half (45.7 cm) of snow on Montreal and more than two feet (61 cm) elsewhere in the region. On top of the snowfall, the storm produced heavy winds that whipped the snow into the air and obliterated visibility. These conditions, combined with frigid temperatures, resulted in more than 20 fatalities.”

“This dreadful storm stalled over New England for more than a day, dropping up to 4 inches (10.2 cm) of snow per hour. Boston, Mass. and several communities in Rhode Island were hit hardest, but even New York City — located some four hours south of Boston — felt the storm’s effects. Meteorologists estimate snow totals between 1 and 3 feet (30.5 and 91.4 cm), with Boston’s total accumulation of 27.1 inches (68.8 cm) setting the city’s single-storm record. Wind speeds measured well over 100 mph (161 kph), causing severe visibility and drifting problems.”

“The Midwest has suffered through many brutal blizzards and monstrous snow storms. However, many parts of this region are more sparsely populated than the eastern U.S., so the effects of these storms haven’t been as acute. This storm, however, hit not just Chicago but cities as disparate as Kalamazoo, Mich., and Gary, Ind.”

Here is a nice graph showing yearly snowfall totals from 1885 to present for the city of Chicago and the graph is shown below: 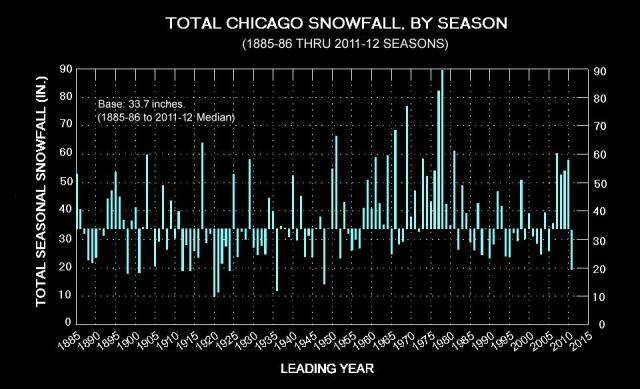 Notice the largest snowfalls occurred in the 1970’s when climate “scientists” were telling us the Earth was doomed because of Global Cooling!

And finally, the Real Science blog has a graph showing the relationship between snowfall and atmospheric CO2 concentrations.  For math challenged Leftists reading this blog, here’s a hint – THERE ISN’T ONE!

We have to confront the brutal facts – The AGW cult’s climate predictions are just not materializing.  They can’t comprehend this fact but instead of rejecting their flawed theory they grow frustrated that people won’t buy their snake oil.  They then demonstrate their desperation by trying to win people to their side by playing on emotions.  Typical Leftists, they are true deniers of history.

1 Response to Climate Change And Blizzards