Using the Kepler Space Telescope, scientists have discovered another planet that orbits a star in just the right location to support life as we know it.  The star, Kepler-69, has two planets and the planet named Kepler-69 C is the one that has a ‘goldilocks’ orbit in what scientists call the Habitable Zone.

Using my Exoplanet app for the iPad, here is the pertinent information about this planet that is 1,930 light years from Earth. 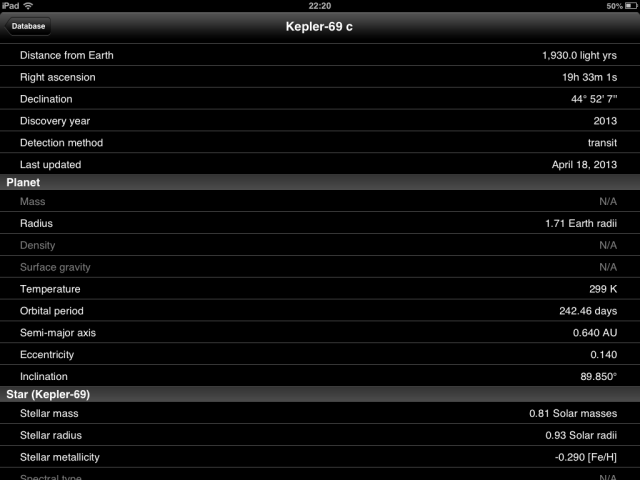 The Exoplanet database currently has over 691 planets cataloged with well defined orbits and many of these planets are in the Habitable Zone.  This is amazing considering only a couple decades ago scientists wondered if there were any planets we could discover much less find hundreds that orbit stars in locations that would be conducive to life as we know it!

It is a testament to the wonders of science and the innate desire of humans to discover new worlds that have led us to where we are now.  We are far from able to travel to these far distant worlds but just knowing there are other stars that have planets very similar to Earth should fill you with a curiosity about what else we don’t know about our Universe.

The hundreds of planets with orbits in the Habitable Zone have only been discovered recently by using a space telescope that is gazing at a very small portion of the night sky (in the constellation Cygnus) that comprises a very small area of our very large galaxy that sits in a Universe with millions of other galaxies.

I like to think that there are scientists on Kepler-69 C that have advanced as far as we have so that they can ‘discover’ our little blue dot and add it to their database of planets that could harbor life as they know it.

Discovering other planets in our little corner of the Milky Way has become commonplace but how do you think we’ll react if we discover evidence of intelligent life on one of these planets one day?