There are two weapons I conceal carry – the North American Arms .22 Magnum and the Magnum Research Micro Desert Eagle .380 ACP – and since I live in the South and wear shorts or light pants 9 months out of the year, the NAA .22 magnum is the weapon of choice due to its incredibly small size.  There is no noticeable bulge and its unique half-way notch cylinder means the hammer rests safely between rounds so there is no chance of an accidental discharge.

But when I’m wearing a coat, jeans, heavy pants or driving in the car the MR .380 is my conceal carry weapon since it provides more knock down power than the .22 magnum.

I recently took this .380 to the range to put it through its paces to check its accuracy and I’ll report on that in this post.

Disclaimer – I am in no way shape or form an expert marksman.  I’m also not a gun novice so the target accuracy I’ll show here can be assumed to represent results that someone of average shooting experience would expect from this weapon.

First, here is a picture of the gun and some specs: 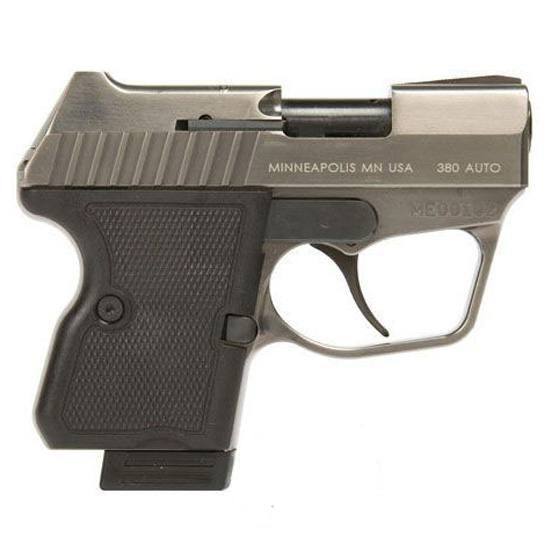 The range I used was Palmetto State Armory and it is a first class, indoor shooting range that has electronic controlled target systems that allow you to position the target up to 25 yards away in increments of 0.5 yards.  See the picture here: 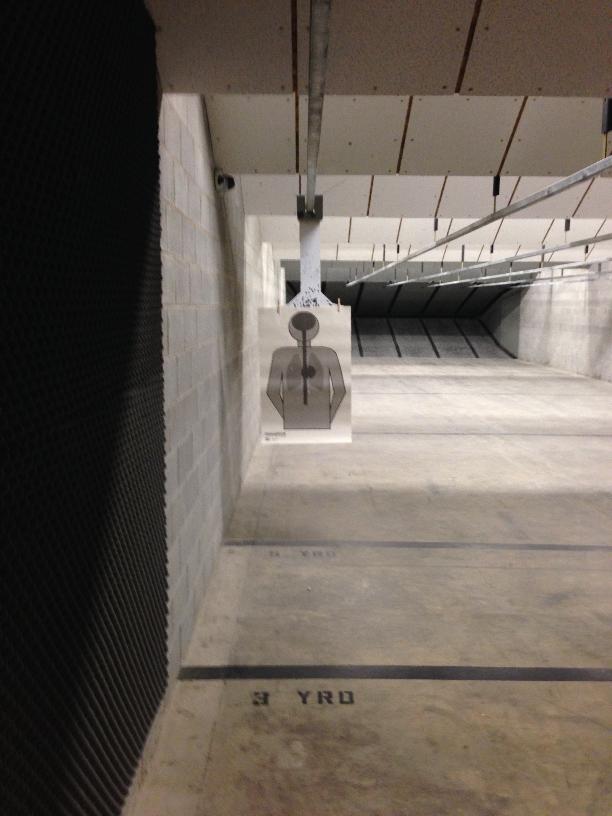 Here is the target after 13 rounds at 5 yards: 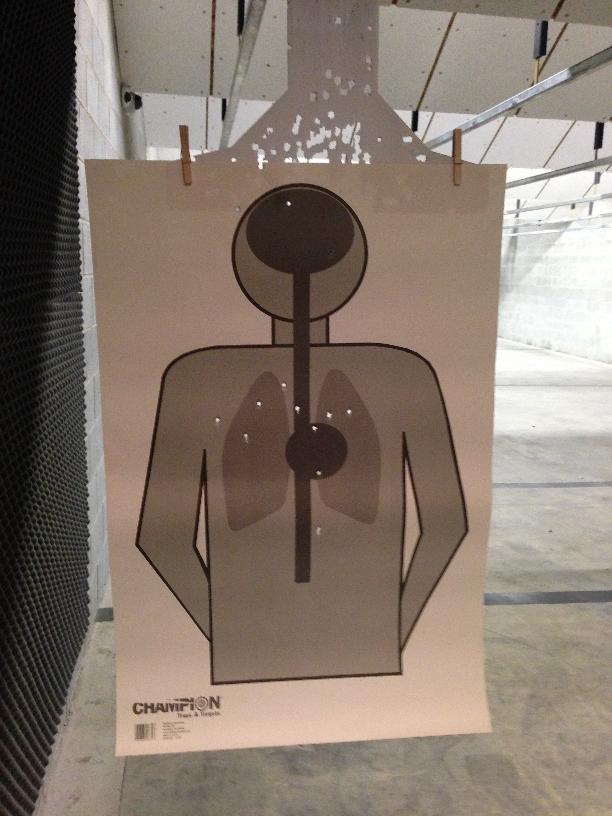 I took 10 shots at the body center mass and three at the head and only missed with one (which was one of the head shots).  At 5 yards (which is the most likely range you’ll have to use a concealed weapon permit (CWP) type weapon for defense) this weapon performed very well.   I keep this weapon loaded with hollow point bullets so 12 out of 13 shots would’ve neutralized the attacker and in the even I’d ever have to use this weapon in self defense, I would aim for center mass instead of the head and in that case I would’ve been 100% successful in dropping the attacker.

At 15 yards I took 5 shots center mass and connected on 4 of them – 80% effective – and this was with a stationary target which would not be the case if I was firing at an attacker.  So the success rate would drop considerably in a real life defense scenario. 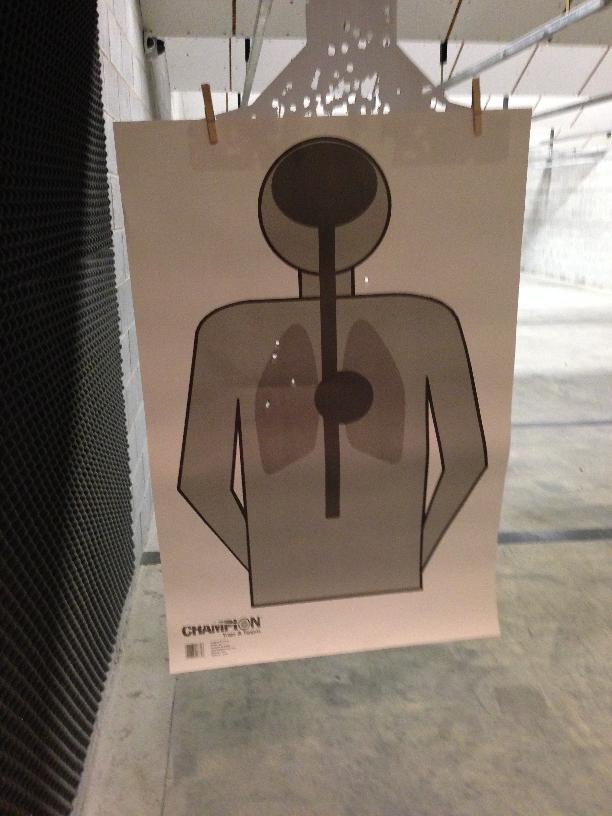 At 20 yards the accuracy really fell off.  I took 10 shots, aiming at center mass, and only hit the target 8 times but 2 of the ‘hits’ were barely on the arm so I count those as misses.  At 20 yards I was really only successful at neutralizing the attacker 60% of the time. 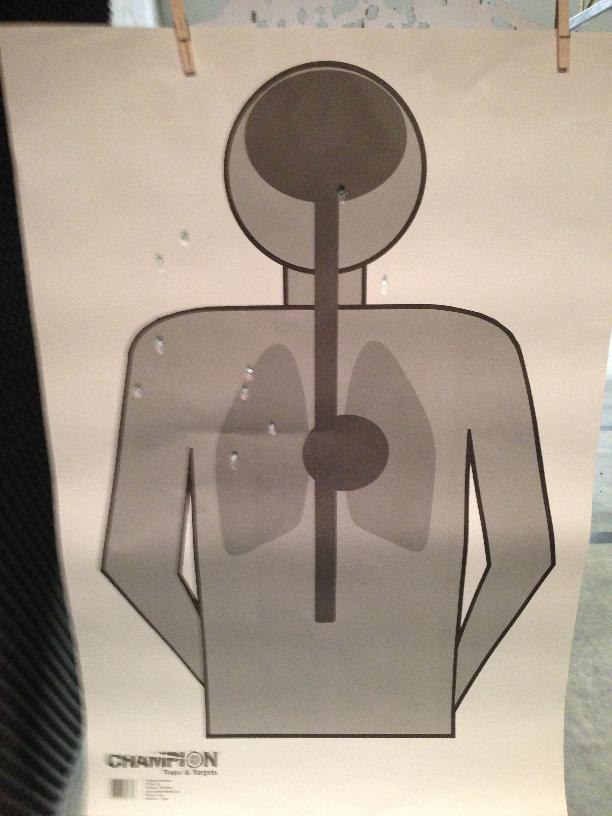 For fun I shot a clip at 25 yards but didn’t hit the target at all so I won’t post that picture!

The weapon is fairly compact and as you can see from the picture above, the recoil of the slide will come close to the top of your hand if you have large hands.  I’m a small guy, 5’ 9” 150 lbs, so that was not an issue for me but if you have a larger frame, this weapon may not be for you.  If you are thinking of purchasing this weapon, hold it in a firing position and have someone move the slide back to see if it comes in contact with your hand.  If it does, this gun is not for you.

The gun if fairly easy to disassemble and clean as well.  It requires a little dexterity to move the slide to the proper position, hold it in that position with one hand and then rotate the barrel with the other to release the slide for cleaning but it can be done with very little practice.

In conclusion, I’m very happy with this weapon as one of the two I conceal carry and after spending time on the range, I’m confident I can defend myself if the situation presented itself.  And it was a very fun gun to shoot!  Very little recoil for the .380 ammo and even though it has a double action only trigger, it was very easy to pull.

If you’re looking at .380 guns for your conceal carry, I highly recommend this weapon.

Addendum – If you are interested in getting a CWP, I gave some guidance on that topic in an earlier post here.   As I stated in that post, the hope of every CWP holder is that they will go their entire life and never have to pull their weapon in defense.  I will exhaust all other methods of defense (including running) before I have to pull my weapon out.   The only, and I mean ONLY, time I’ll ever pull my weapon out in public is to fire it as a last resort in self defense.

This entry was posted in CWP, guns and ammo. Bookmark the permalink.