The galaxy M82, located in the Ursa Major (UMa) constellation (i.e. The Big Dipper), had a star go supernova a few days ago (designated SN 2014J) and over the coming week or so you will have an opportunity to see something that very few people will ever get to see.

The reason that non professional astronomers (who don’t have access to huge land and space based telescopes) can see this event is because M82 is part of a galaxy pair (M81 being the other) that is located just about 12 million light years away which is practically our next door neighbor in galactic terms.  This supernova is close enough and bright enough that we amateur astronomers can view this bit of cosmic evolution (a star dying, sending out its matter to be recombined to form other stars) with our own eyes and this is truly a once in a lifetime event.

I went out tonight to see this supernova I hope with this blog post, you’ll be inspired to do the same.

At first, I tried to see the supernova with my 15×60 binoculars (which I have to secure to a tripod) but due to the low magnitude of the supernova and the intense light pollution in my northern sky, I was unable to detect the exploding star.  I could easily see M81 and M82 in the binoculars but they appeared like any other galaxy in my binoculars, a fuzzy blob with no bright features.  Although I was unsuccessful, others may be able to see this supernova with binoculars if you live in a region where the northern sky is dark and unhampered by light pollution.  But unfortunately for me, I don’t live in such a location.

Undaunted, I then pulled out my big gun – the 10” Newtonian reflector.

With this huge light bucket I was able to easily view the exploding star with my 27mm Televue Panoptic eyepiece although I had to use averted vision techniques to really see it.  For those unfamiliar, averted vision is the method of seeing faint objects by looking to the side of the desired object (it’s a skill we humans have hardcoded in our DNA because this gives us good periphery vision to spot predators and/or prey).  Many back yard astronomers, like myself, who like to hunt distant galaxies and nebulae are familiar with this technique.

I had another bullet for this big gun so I went a step further and used my 11mm Televue Nagler eyepiece and this really made the supernova pop and at times I didn’t need to use averted vision to see it.  I spent about 10 minutes in the freezing temperatures staring at this supernova and I only stopped once my toes started getting numb.

One of the great things about Astronomy is the fact that when we look up to the cosmos we are actually sitting in a time machine.  The stars we see in the night sky with our naked eye are all contained within our Milky Way Galaxy which is about 100 thousand light years across.  The stars we see with our naked eyes are really only thousands of light years away but that still means that the light you are seeing left those stars about the time Moses was leading his people out of slavery in Egypt!

The power of our virtual time machine grows when we use a telescope or binoculars and this allows us to not only look deeper into our own galaxy but see other galaxies that are millions of light years away from us.  When I looked into my telescope tonight, the photons of the supernova SN 2014J explosion were hitting my eyes 12 million years AFTER the event happened!  That means I was seeing this star’s death unfold as it happened 10 million years before humans appeared on the evolutionary time scale.  Truly amazing!

Now here are my tips if you want to see this supernova for yourself.

Although there are many articles with locator guides to this supernova, I have to be honest with you – Finding this galaxy is not easy for those who are not familiar with the night sky and most likely you’ll need a telescope.

Because I’m “Old School”, I have a manual telescope on a non-motorized Dobsonian Mount.  I like to see the objects with my own eyes (versus through photographs that have been enhanced and over exposed) and I like to find the objects myself (versus punching in coordinates and having a computer drive move my telescope to that point).  That’s just me and if you have an automated telescope then chances are you’ve already punched in the coordinates and taken some fantastic photos.  The rest of this blog post is for those who aren’t so lucky!

Don’t be discouraged by the fact that this hunting expedition will be tough for even those familiar with the constellations.  Fortunately for even the most novice amateur astronomer, this supernova is located in one of the most easily recognized northern hemispherical constellations – The Big Dipper.

My suggestion is to start at the upper left star in the Big Dipper ‘scoop’ (Dubhe) and then move up to the next brightest star (h UMa).  Then move left to an asterism of stars that looks like an angle and the next two pictures should help you with that 2 step star hop (note that my star chart app calls M81 “Bode’s Nebula” since that is another name it is known by).

Once you’ve located that angle asterism, you will then need to move down a little to find M81 and M82.

Once you zoom in on M82, you’ll see the supernova located inside the galaxy at the tip of the bottom arrow in the following picture. 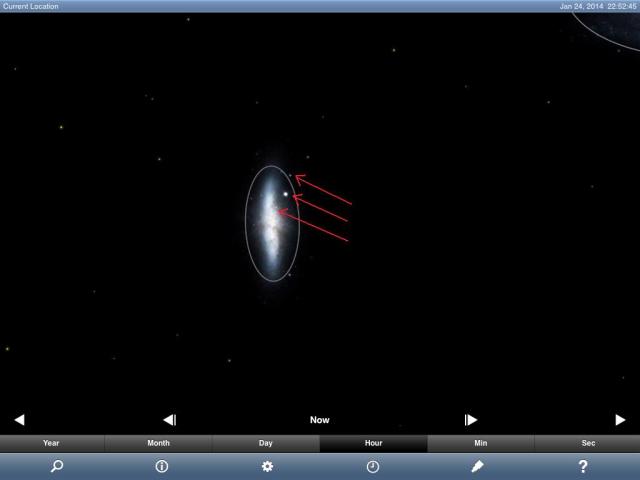 The other two arrows in the picture above represent normal stars that are always present but if you can find that lower star then you’ve located the supernova!

Happy hunting fellow amateur astronomers and I hope you receive as much awe and joy as I received tonight when I saw SN 2014J with my own eyes.