It has been a year since my doctor diagnosed me with Type 2 Diabetes and although that life changing moment was difficult on me and my family, in hindsight it was the best wake-up call I could have received.

I shared the good news in a previous post that in less than a year’s time I brought my blood sugar measurements in line with a non-diabetic person and how I did this without medication.  When I saw my endocrinologist on 13-JAN-14 for a routine checkup he noticed my A1C was 5.1% (which is right in the middle of the range for a non-diabetic) and he released me from his care since there was nothing more he could do for me.

But being an engineer who is a firm believer in the Continuous Improvement (CI) methodology, I was not satisfied.

For those not familiar, CI is a four step process to improve a process and it goes something like this:

Plan – Propose an improvement or solution to a problem.

Do – Implement the improvement or solution.

Check – Measure the process to ascertain the effects of the change.

Act – Either abandon or accept your proposal based on the effects of the process that the data showed.

As I have stated before in previous posts on the Diabetes topic, I was a bread/carbohydrate junkie.  I had bread with every meal and threw in generous portions of potatoes, rice, grits and other starchy foods that quickly convert into sugars in the bloodstream and would raise my blood sugar levels far above normal once I stopped taking the diabetes medicine (and if I ate enough of it, the medicine couldn’t bring the blood sugar levels down either).

Eliminating the potatoes, rice, beans and grits were hard but it was surprisingly easier than I had thought – I just substituted those portions with vegetables and that filled that void.  But I love sandwiches and found the act of eating a sandwich without the bread to hold it together was just insane.  And don’t get me started on how hard it is to eat an enchilada without a tortilla!

So the day after my endocrinologist released me, I decided to perform a CI experiment by eliminating these from my diet.

Did I have to eliminate sandwiches and Mexican food?  No!  I still ate the internal contents of those great foods but I had to make some changes since I no longer had the bread or tortillas to hold them together.  My ‘sandwiches’ were eaten with a knife and fork and my enchiladas, tacos and burritos were eaten in bowls.

My daily intake of carbohydrates was about 50g when I was eating these low carbohydrate pitas and after I eliminated them I dropped to about 30g per day.  As a side note, the American Diabetes Association recommends a diabetic limit his daily carbohydrate intake to 270g and that advice is basically like telling a person to drink poison but that is a topic for another blog post.

But you will notice two spikes in the post-pita elimination data and those had an assignable cause.  The first big spike was from a meal I ordered at a restaurant that I wasn’t sure of when I placed the order but once it arrived I knew it had all kinds of sugary goodness in the sauce.  I was with a large group of work colleagues and didn’t want to make a fuss so I ate it and sure enough my morning blood sugars were high for 3 days after.

The other spike toward the end of the data set was intentional.  I ordered an enchilada and ate the tortilla just to see what the effect would be and sure enough my morning blood sugar measurements were high for 2 days after.

If I remove those 5 data points (for which I knew I went off my diet and altered the experiment) the graph looks like this. 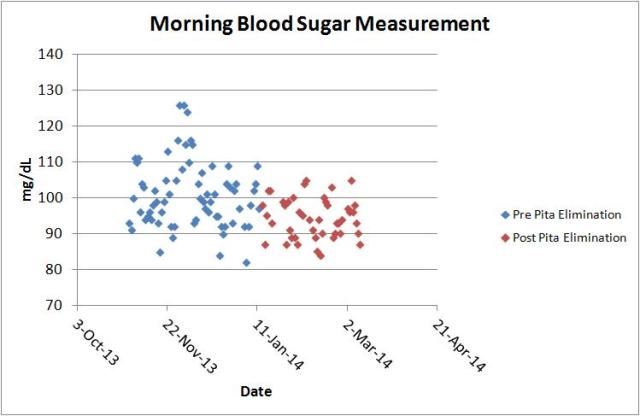 Eliminating these pitas was something I knew I had to do but I had to design the experiment and prove my hypothesis with data.  No looking back now…..

Addendum – For further proof of how you can beat Type 2 Diabetes in less than a year, here is a graphs of my morning blood sugar measurements for the past year. 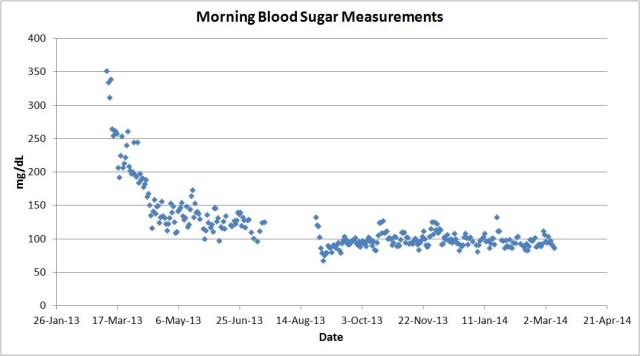