We Need to Look At The Third Toolbox

The first fiscal policy drawer is labeled “Discretionary” and the two primary tools in this drawer consist of tax rates and public works expenditures.  Tax rate increases can be used to slow the amount of money in an overheated economy and help avoid inflation and during times of recession tax rates can be lowered to give people more money to jump start the economy.  Public works expenditures are what we like to call “Stimulus” and are aimed at using the government to provide an influx of cash in the construction industry that will have ripple effects across the nation.

The second fiscal policy drawer is labeled “Non Discretionary” and the two primary tools in this drawer consist of progressive taxes and unemployment compensation.  These tools are sometimes called automatic stabilizers since they are designed to help keep the economy in control and prevent wild swings.  During boom times, people have lots of income that is being taxed and loaded into government coffers such as Welfare, Medicaid, Social Security and Unemployment Insurance.  During a recession, income taxes decrease but then those social programs are supposed to provide a helping hand to people until they get back on their feet and the next boom occurs.

During times such as now, the discretionary tools must be used to help jumpstart the economy and early in 2009 we saw a massive stimulus package that demonstrated the attempted use of that tool – although the ARRA’s goals were not met).  Normally tax rates would go down as well but there has been very little of this over the past 3 years because of two reasons – 1) Democrats who are addicted to taxing and spending controlled both houses of Congress for most of this period and 2) The US Debt to GDP ratio is 100% so many in Democrats in congress favor taxing the rich to help reduce that debt.  So we have seen that the Government has exhausted the use of these tools with little effect on our economy but yet President Obama has suggested another plan, called the American Jobs Act, which is really just another round of stimulus and tax increases on the ‘rich’ to help us out.   Bottom line – This tool box has been used but the economy is still in terrible shape.

The drawer of this tool box has three tools that the Fed can use.  The first two tools are aimed at manipulating interest rates and are called the discount rate and the open market operation.  The Fed sets the discount rate which banks borrow money and this in turn sets the rate that consumers are charged for loans for cars, homes, business, etc.  The Fed can also buy and sell federal treasury securities on the open market to influence short term and long term interest rates.  The Fed has another tool which it can use to mandate how much reserves that banks must keep on hand and this is a tool used to either stimulate the economy or keep it from overheating (inflation).  This tool was also used but it was implemented to make banks more financially sound in the wake of the financial crisis in late 2008.

To the Fed’s credit, it has used all of these tools and they have been very successful at keeping interest rates at all time lows.  Over the past few years, the Fed has dropped the discount rate, bought treasure securities through Quantitative Easing (QE) 1, QE2 and now Operation Twist and indeed interest rates are extremely low.  See here a graph of the 10 year Treasury Note and it is extremely low. 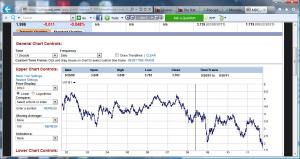 Based on accepted economic principles, this is what the Fed should do to stimulate a stagnant economy because the theory goes that people will be motivated to purchase a new house and companies will be motivated to add capital if the cost of borrowing money is low.  The interest rates are now so low that money is basically ‘free’ to consumers and companies but sadly, like the fiscal policy tool box, all the tools have been used by the Fed and we are still in a malaise in the US.

So all the tools in both tool boxes have been used but the economy has still not recovered.  What are we to do now?  I think we should look for a third tool box that, until recently, has been irrelevant.  I like to call this tool box “Expectations” and I’ll explain why it contains one tool that has been sadly over used but also has many other tools that are rusting from lack of attention.

In today’s world, news reaches us at light speed.  We see news on Twitter, Facebook and thousands of news sites on the web.  We are awash with information that bombards us daily with events that affect the economy.  From that information we draw conclusions about the economy and set our expectations about the future.  If our expectations are high we spend, invest and do things that are generally good for the economy.  If our expectations are low we save, delay purchases and horde money to save for those bad days that we expect to be on the horizon.  It is my opinion that most Americans expect the economy to be stagnant for quite some time and are acting in ways that countermand the results of the traditional tools that have been put to work over the past three years.  We need to pull that tool of positive expectations out and use it but let me first tell you how we’ve overused the other tool in this box to lower expectations.

Obamacare hangs like a sword of Damocles over every business and they are preparing for the worse.  They are paring their workforce to the bare minimum and looking for ways to push healthcare costs back to employees.  Some industries, like medical device manufacturers, are preparing for higher taxes on products they make that will start in 2013 and this extra tax must be offset by something and that is accomplished by limiting growth and hiring.  People see what a mess government sponsored healthcare made in other countries like England and they are scared of what that will mean for the US.

Government agencies have accelerated regulation that is stifling business.  The DOJ raids on guitar maker Gibson for using wood not processed according to Indian laws are one example.  The DOJ has also entered into a lawsuit against hospitals because they feel that they have implanted Implantable Cardioverter Defibrillators (ICDs) in patients who don’t need them.  Sudden Cardiac Arrest kills close to 900 people each day in the US and ICDs could save their lives but the current lawsuit has hastened these implants because doctors and hospitals are wary of this lawsuit.  The FDA appears to be intentionally holding up product approvals across the board and preventing growth in the medical industry and preventing US citizens from receiving much needed care.  The EPA has instituted so many new regulations that they recently said they would need 230,000 more employees to handle the paper work.

So my contention is that all the added regulations, which were implemented by the Obama administration, is stifling the economy.  The tools in the standard tool boxes have not worked because the increased regulation has dropped expectations so low that we can’t get out of our own way.  It’s like we are in a car pressing on the accelerator but we don’t move because the parking brake is on and our other foot is pressing the brake pedal to the floor.  It’s time to let the economy and the Free Market work but we have to release the brake.   If we continue to stifle corporate growth through over regulation, the traditional tools will have no effect on the Market and we are seeing that play out right now.

My recommendation is to put down the tools I like to call ‘over regulation’ and pick up the tools I call ‘free market’ and watch the economy take off.  We also need a President who will foster a culture of optimism but instead we have a community organizer who is intent on confrontation, unwilling to admit his failures and refuses to compromise.  Unfortunately, we’ll have to wait until 2013 when we remove President Obama and have a Conservative majority in the Senate because the Democrats have shown that they are hell bent on punishing corporations with higher taxes and increased regulation.

5 Responses to We Need to Look At The Third Toolbox