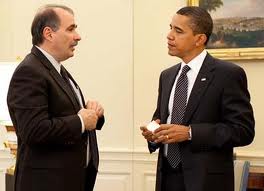 Senior Obama campaign strategist David Axelrod made some comments to reporters today and in doing so, tipped the Obama camp’s hand on how they’ll battle Mitt Romney in the general election.  It appears the Obama camp sees Romney as the front runner and eventual Republican presidential nominee and they have already started to sketch the framework of their attack narratives.

Their strategy is to paint Romney as a flip-flop artist who presented himself as a moderate to the people of Massachusetts when he was running for governor and now presents himself as a strong Conservative now that he is running for President and seeks the votes of the Tea Party.  You can see the gist of their attack plan in the following quote,

“It is a pattern time and time and time again and you heard it again last night,” Axelrod said. “It’s consistent with a guy who ran for the governorship of Massachusetts and for the Senate in Massachusetts as a pro-choice moderate who supported civil unions and supported environmental protections … to the guy you see today who is hard after the tea party vote and thrown all of his positions over.”

Why is that an issue?  Don’t all politicians lie to get votes?  Well, yes to some extent but Axelrod presents the case that America needs someone in the White House that can be trusted and they don’t need another politician who changes his social views depending on the audience that he is seeking.  I have to agree with Axelrod on that point and if he really believed those words I don’t understand how he can still work for Obama in good conscience but that is another matter.  Axelrod lays out the argument here,

“The question of trust is important particularly for the middle class,” Axelrod said. “They want to know that where the president was yesterday is where he’ll be today and where he’ll be tomorrow,” Axelrod said. “It’s hardly the case when you’re all over the lot as Gov. Romney was last night, has been throughout this campaign, has in fact been throughout his career.”

So that is their plan, to pigeonhole Romney as someone who has no moral compass but instead changes his views to match the voting demographic he is going after.  I happen to believe that Romney has more Character and Integrity in his little finger than Obama has in his whole body but I’m a strong conservative and even if the Republican presidential nominee is a hollow log, I’ll vote against Obama.  I feel it is critical for the fate of our country to remove Obama from the White House in 2013. But Obama’s attack strategy might take root with the independent and undecided voters (where all elections are won).   The Community-Organizer-in-Chief is skilled in Alinsky tactics and can, in the words of Alinsky, “Pick a target, freeze it, personalize it and polarize it.”

Romney has still not given a good response to the fact that he pushed for and got a Massachusetts state-run health care reform bill that was used as the model for Obamacare.  Obamacare is the number one target that all the presidential nominees, except Romney, can hammer the President on.   When Romney stumbles in a debate on this topic, Obama is sure to bring up the shifting social views of Romney mentioned above and paint him as someone who can’t be trusted.

Republicans take note of this tactic as you choose your candidate and look closely at Romney to see if he is smart enough to get in front of this attack and defend it now.  If he can’t defend this now while debating fellow Republicans, he’ll be eaten alive in the general election by a masterful campaigner like Obama.

2 Responses to Obama Tips His Hand