I pondered in a previous post  how we would structure government expenditures if we were starting a new country.  But let’s expand that thought experiment and ask – what are the measurable goals for our country?  What are we striving for?  How do we know if we’ve arrived at our goals?  If we don’t have goals or we don’t know have metrics that we can use to tell us if we are there, then we are doomed to fail.

And I’m not talking about Life, Liberty, Pursuit of Happiness, Providing for the common defense kinds of stuff.  Those are all important goals of our country but they are not measureable and therefore our success or failure related to those goals is subjective. 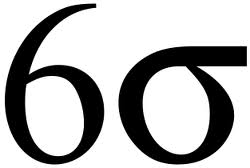 I am an engineer by both degree and profession and I believe in the Six Sigma strategy.  This strategy is mainly used to solve manufacturing problems but it can be used in other areas and this includes Government.  The heart of Six Sigma involves continuous improvement to reach a lofty goal (for example 100% product yields) and the methodology is characterized by DMAIC.  The DMAIC methodology is defined as:

Define the problem or goal

Improve the process to correct areas that are off course

Unemployment Rate is a metric that should be included.  We are humans and it is in our DNA to work for a living and strive to succeed.  We don’t want handouts and we have a more positive attitude about life when we have a profession that we enjoy and feel that we contribute to society.  Ideally the target for unemployment would be 0% but people change jobs all the time and the Market punishes companies that make poor decisions so there will always be a small segment of the population that is out of work and looking.  In Macroeconomic terms this is called the NAIRU (Non-Accelerated Inflation Rate of Employment) and is estimated to be about 5%.

Entitlement Spending from the Government would also be a metric we should use.  As I showed in a previous post, we are currently spending 93.7% of total tax revenue on Social Security, Welfare, Medicare, Medicaid and Unemployment benefits.   This is obviously unacceptable in a Capitalistic model so the goal for this metric must be lower than current levels.  The more we incentivize citizens to remain out of the workforce the closer we move to a Socialism type system which is a recipe for disaster.  In some respects, I can make the argument that we are already on this Socialism path when almost all of our tax revenue gets redistributed to other citizens but I think we can correct this.

Total Government Spending as a percent of GDP has averaged around 18% but we are on track to reach 25% as shown in this report from the Heritage Foundation.   I believe that the government must take care of those who are in need (elderly who don’t have healthy retirement plans, unemployed, those below the poverty line, etc.) but I do not think we can consider ourselves exceptional when we spend almost 100% of tax revenues on these programs.

In reality we should strive for a goal much less than that but I’m willing to make this at least a short term goal.  Think about it – In an ideal system, all citizens would be properly educated to find a high skilled job, save for the future and make enough money to provide for their families while they are working and into their retirement years.  This is obviously impossible, just as the Utopia of Socialism is impossible, but that doesn’t mean it shouldn’t be a goal to strive for.

GDP Growth Rate is another metric that should be used.  The average US GDP growth rate is estimated at about 3.8% between 1946 and 1973 but has experienced a lower average rate of 2.7% since.  With the rise of globalization it is unreasonable to think we’ll enjoy the glory days when the US was the only game in town but Americans can innovate and create opportunities for high skilled labor to get us back to a higher GDP growth rate.  Let’s split the difference and set a goal of 3.5% long term average GDP growth rate to be considered exceptional.  We are well below that so this means we’ll need drastically higher GDP growth rates to return to the long term average level.

Inflation is another critical metric that we should consider.  It doesn’t help if everyone is employed but carrying their money around in wheel barrels because our currency is worthless.  The long term average inflation rate of the US is 3.38% according to the following link.  Based on this data, let’s set a goal of keeping inflation below 3.5%.

Debt as a percent of GDP should also be a metric we use.  From the following link, you can see how the Debt-to-GDP ratio has exploded from less that 10% in 1900 to over 100% in 2011.  Ideally we should be at 0% but we must realize that occasionally it is smart to carry some debt (to compensate during recessions, finance a war, etc.).  According to this NPR story, experts aren’t sure what the ideal Debt-to-GDP ratio should be but opinions range from 30% to 70%.  100%+ is obviously dangerous so I’m proposing a goal for Debt-to-GDP of 50%.

So here is my proposal for measureable goals that we can use to determine how successful we are as a country:

2) Entitlement spending below 65% of tax revenues,

What is not to love about this? Can we all agree that having metric targets like these would classify us as exceptional?  There might be some liberals who would not like these targets because it would move people off Government entitlement programs and into a position of self reliance.  Without people dependent on the government handouts then the Democratic voting base would shrink and Socialists would decry about ‘income inequality’ or some other nonsense like that.  But by and large, most of America would gladly embrace these targets.

Now the really big question – How do we get there?  Raising taxes, shovel ready jobs and increasing entitlement spending, as Obama and the Liberals have proposed, will not get us there.  But we will get ther if we Improve education, remove oppressive regulations, eliminate Crony Capitalism and allow the Free Market to dictate policy.  Senator Paul Ryan has put forth a roadmap to get us there but there aren’t enough elected leaders who think like him.  Let’s change that in 2012.