No, this is not the title of a new comedy/parody about Occupy Wall Street.  I heard two stories on NPR this evening on the drive home that struck me as examples of what is wrong with both Socialism and Unions and the stories used Automobiles as the teaching object. 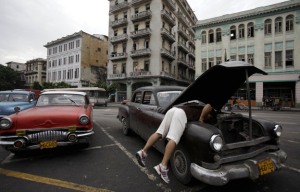 The first story is about selling used cars in Cuba.  Unbeknownst to me, it has been forbidden in Cuba to sell a used car and you couldn’t even buy a new car unless the government gave you permission.  In Cuba, owning a car is a privilege and not a right and this makes sense because in a Socialistic society there is no personal property, it all belongs to the State and unless given special permission you can’t own anything.

After decades of Socialism in Cuba, people have retained their old cars and have done whatever they can to make them drivable because they won’t get another one.  Starting this week, Cuba changed that policy and is allowing people to sell used cars.  Embargoes and high import taxes have prevented newer cars from entering the country so the supply of newer model used cars is scarce and the market has set the price of a 2005 Honda Civic with 60,000 miles on it will at $65,000.

There was a particularly telling quote here:

“We’re happy about the new change, because it removes an unnecessary restriction,” Cantero says. “I’m going to take better care of the car knowing I can sell it if I need to.”

Economics always comes down to motivations and when people have a sense of Freedom and ownership they make better decisions.  If you know, that no matter how hard you work, you won’t make more money or be able to obtain better goods and services then why would you?  That is the fallacy of Socialism and why it fails every time.  Occupy Wall Street is starting to learn those lessons now and this is why their movement is ridiculous.

The next story is about bus schedule problems in Detroit.   The citizens in Detroit are trying to work hard and make a living but some of the people who don’t own a car are struggling to get to work on time because there are 2 to 3 hour delays in the bus schedule.  This is very disheartening and why would the city make it even harder for people to get to work?  With winter coming, standing at a bus stop for hours is not only inconvenient but dangerous.

As it turns out, the Mayor claims that the problem lies in the fact that about half of the city’s bus fleet is stuck in the garage waiting for the Union mechanics to complete repairs.  The Union is unhappy with the city cutting their overtime so they are participating in a work slowdown which means they are intentionally dragging their feet on repairs to teach the city a lesson.

The Detroit News also clarified this issue and confirmed that the Union appears to be upset because overtime was cut recently.  Of course Detroit doesn’t have the money to pay these high wages demanded by Union thugs but there is no compassion or willing to work together from the Union side.  Is anyone shocked by that?

Does Detroit need yet another object lesson on how Unions are destroying their city?  Unemployment in Detroit is terrible and here is the jobless graph from the Michigan Department of Technology, Management and Budget:

And to be fair, it is just not the fault of the Unions.  Detroit is a case study on what can happen when a government buys into Liberal policies hook, line and sinker.

This entry was posted in economics, politics, unionthugs. Bookmark the permalink.

1 Response to Socialism, Unions and Automobiles