Is This How A Leader Acts? 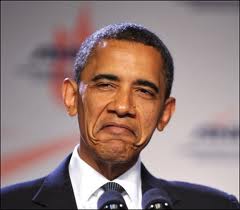 Obama gave us another example of his leadership yesterday by calling US companies “lazy.”  This happened at a speech to a business forum during the Economic Summit with many Asian countries attending where topics such as trade and currency policy were discussed.  I’m sure the Asian leaders enjoyed hearing how lazy American companies are and they’ll be sure and take that message back with them.

This isn’t the first “tough love” Obama gave us.  Remember in late September of this year Obama called Americans “soft.”

I’m all for shooting straight and if there is one person I want to give me the facts without sugar coating them, it is the POTUS.  I’m a big boy and can take the brutal facts and am comfortable confronting them and I truly appreciate those who have the courage to bring them to my attention.

So is this what we have here?  Has Obama mined a key fact that is hindering American growth?  Have Americans lost their fierce competitive edge?

American companies are working harder and more efficiently than ever and this is noted in the productivity numbers from the Bureau of Labor Statistics.   We’ve dropped off a little in the past couple of years and I’m sure the great recession had something to do with that but you can’t say we are on a downward trend.

And drilling into the last 20 years, you can see we are on an upward trend and our productivity numbers are better than the ‘good ole days’ of the 1990’s.

So I must disagree with Obama that American businesses are lazy.  Instead, I have another reason for jobs going overseas and American companies not expanding.  It’s from over regulation and I’ve written about it here.  The EPA, FDA, DoJ and SEC are killing American business and if the President can’t see this, we have a big problem.

Who Should We Call Lazy?

Would Obama call Unions lazy?  They continually hold out for better benefits while holding US companies hostage so they can get paid more for working less.  This is a key reason why their membership has decreased as manufacturing has moved to other countries.  Go to Flint Michigan and ask those residents how Unions have benefited their community.

Would Obama call people who have been on Unemployment Insurance benefits for over 2 years lazy?  They make more money staying on the government entitlement payroll than accepting a job and entering the workforce.   The Heritage Foundation has been shown here that extending these benefits actually hurts the economy.

Would Obama call people who never try to get off Welfare lazy?  There is a clear link to poverty rate and Welfare spending and this is obvious to those who work for a living.

Would Obama call the idiots at Occupy Wall Street lazy?  Judging from their list of demands, it appears they want more money for doing less work.  Free college education, guaranteed living wage regardless of employment status, free healthcare, debt forgiveness and $2 trillion government spending (debt) on environmental and infrastructure projects are just a few of their demands.  It must be stated that all these demands come from people who don’t pay taxes.

The President is Lazy

I am continually appalled at the hubris of this President when he attacks American businesses which are the backbone and economic engine of America (and the main source of tax dollars).  Get out of the way and let American companies and the Free Market do what they do best and if we still don’t have growth and the productivity numbers drop, then you can call us lazy.  Until then, spare us your sanctimony. 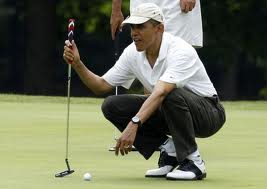 I will never abide a politician calling US companies lazy and especially not from a man who went golfing 60 times from January 2009 to March 2011 which works out to over 2 times per month.  I’m a golf fanatic but my job (at a US company) doesn’t allow me that amount of leisure activity.  I’d like to think that the leader of the Free World would have a little more on his plate than I do and would find a better use of his spare time.

2 Responses to Is This How A Leader Acts?