As an amateur astronomer, one of my favorite things to do is introduce others to the wonders of the cosmos and I wrote a post explaining why this is a very worthwhile endeavor.  Astronomy is a hobby that can’t be enjoyed by just reading or looking at pictures but must be exercised by periodically going outside on a clear night and looking up.  To help those who wish to delve into this very noble field, here is a guide for beginners during the spring months of 2012 (March-May).

Before I get to the viewing guide, I need to explain why opposition is such a special term when talking about viewing celestial bodies.  Opposition means that the object we are viewing is at a point in line with the Earth and the Sun and therefore means it is at its closest point during this particular orbit.  Distance is important because the closer the object is the more details we can tease out of it but also, when an object is at this opposition point that means we can go out at midnight and the object will be directly overhead.  The photons of light that are travelling from the object to our eyes passes through our atmosphere at the steepest angle (perpendicular to the atmosphere) and therefore has the least amount of distortion from the atmosphere.  Viewing a planet at opposition during midnight provides the best images of that planet because the planet is close and the interference of the atmosphere is minimized.

The most “take your breath away” image I show people in my telescope is Saturn and during the latter spring months this beautiful planet will be in a prime viewing location.  The optimum viewing will be in May when Saturn will be at its closest approach to us this trip around the Sun and will be directly overhead at midnight.   See the star finder picture below to help locate this ringed planet. 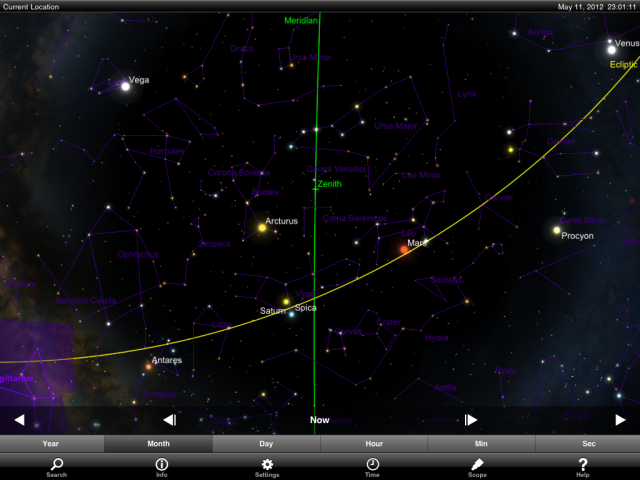 Saturn is in the constellation Virgo and there is a very bright star, Spica, which will be directly below this planet.  Saturn will look like a star with your naked eye but you can tell that its color sets it apart from the normal stellar bodies that make up the night sky.  With binoculars you can see the rings and some of its 5 major moons (Titan, Dione, Enceladus, Tethys and Rhea) and with a moderate sized telescope you can view all the moons and make out details on the planet and the rings.

Below are 2 photographs I took with my 10” Newtonian Reflector on a Dobsonian mount.  My telescope is manual which means it doesn’t have a drive to track the scope to match the rotation of the Earth so the photos aren’t the best but you can get an idea of what you can see in a telescope. 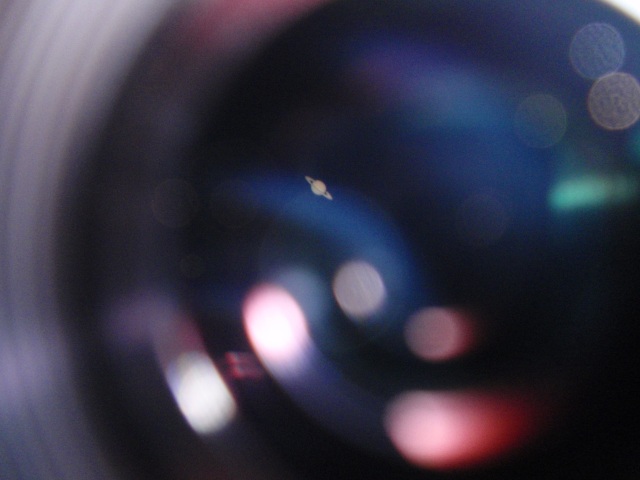 OK, I forgot to turn the flash off but you get the idea. 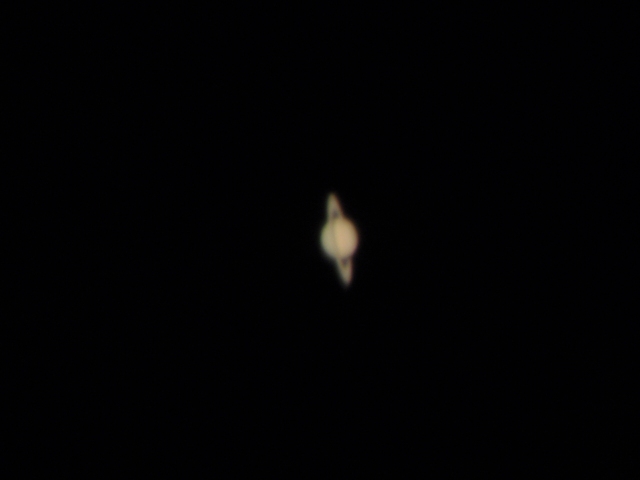 The red planet is in prime viewing locations in the night sky during March and April and the planet reached opposition on 04-MAR-12 but you needed to go out at midnight to take advantage of that.  Later in March and in early April, Mars is overhead at a more reasonable time (10:00 pm on 19-APR-12) and the planet is more easily accessible for those early risers who can’t stay up late.  Below is a picture of the Southern April sky and where the red planet is located. 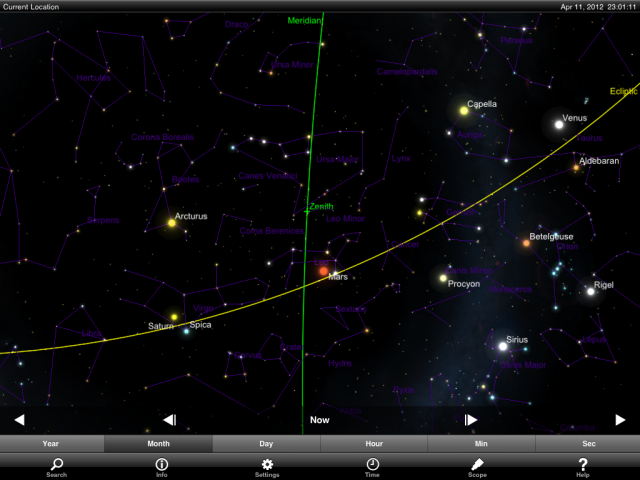 It is possible to not only make out surface features on Mars during this time but also catch a glimpse of the polar ice caps of mars.  Below is a photograph of Mars taken from amateurs using tracking telescopes and you can view others on this site. 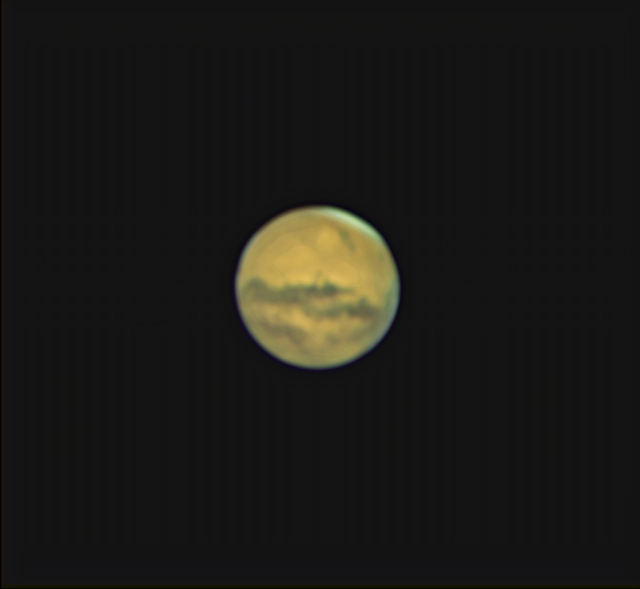 Here is what Mars looks like when using the Hubble Space Telescope but don’t have any illusions that you can see this kind of detail using binoculars or land based telescopes. 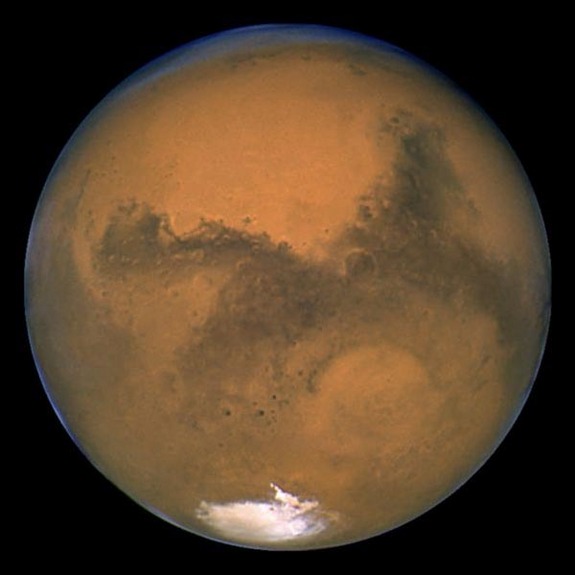 During the spring, the Virgo Galaxy Cluster is in the Southern skies and on a clear night with a decent sized telescope you can see dozens of galaxies even in a moderately dark sky location.  With space based telescopes, scientists have viewed over 1,000 galaxies in this cluster that is located about 50 million light years from Earth.  That means the photons of light that are hitting your eyes left the stars of those galaxies 50 million years ago – which was about the time dinosaurs became extinct and long before humans appeared on the scene (2 million years ago).  This is one of the subtle benefits of Astronomy – Your eyes become a time machine where you see the universe as it was many years ago.

Galaxies are one of my favorite objects to look at in the night sky with my telescope.  With each galaxy I look at, I am seeing the photons of light from billions of stars that could have millions of planets orbiting them and thousands of these planets could be in the habitable zone to foster carbon based life.  Someone, on those planets, could be looking through a telescope and catching a glimpse of the Milky Way galaxy and having the same sense of wonder.

Here is a good site showing all the galaxies of the Virgo Cluster and the picture below shows where to look for these galaxies (red ellipse). 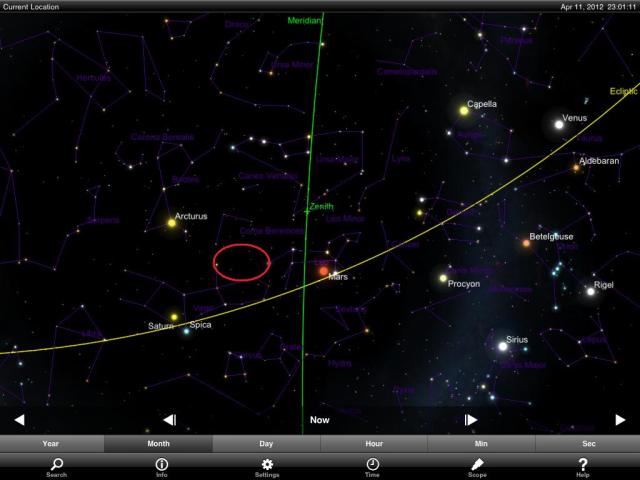 Spring is a great time to get outside before the temperatures and humidity make it uncomfortable and the thick atmosphere makes for poor seeing.  Get out and look at many of the planets who share an orbit with our Sun as well as the galaxies that share our Cosmos.