An Example Of Liberal Tactics

I saw a tweet from @ChicoDelainky that stated George Zimmerman, the man who shot Trayvon Martin, was a member of the Tea Party.  This is absurd and in reality George Zimmerman is a registered democrat as shown by the following voter registration and this was already covered by several blogs such as this one.

In an effort to show this Liberal the truth, I decided to engage him and the various tweet exchanges are shown below.

Now notice in the next tweet that the Liberal is frustrated with the facts so he shifts the conversation (starts talking about Jared Loughner).  This is a classical Liberal tactic when the facts don’t support their narrative so I was not surprised by this.

In the next tweet we’ll see that @ChicoDelainky is now resorting to throwing anything against a wall to see if it sticks.  When faced with arguments that totally rebut his arguments, the Liberal now attempts to offer “proof” that Zimmerman was a Tea Party member.  That’s right, Zimmerman knew the words to Lynyrd Skynyrd’s “Sweet Home Alabama” song. 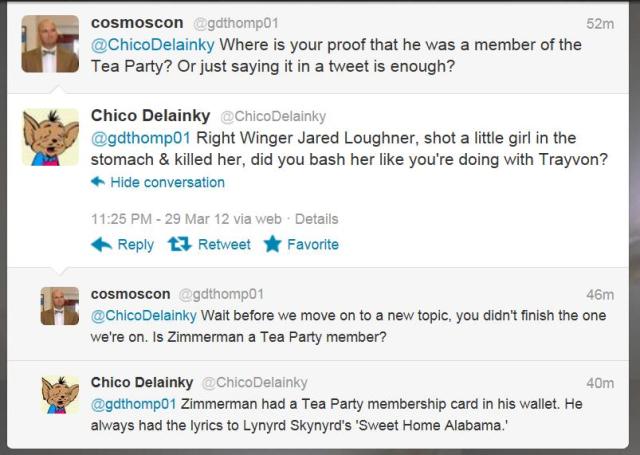 Of course there is no source to the Tea Party membership card or the knowledge of the lyrics to “Sweet Home Alabama” but Liberals never let facts get in the way of a good rant.

It was obvious that @ChicoDelainky was called on his lies and was unable to defend his statement that Zimmerman was a Tea Party member.  But what do Liberals do?  Admit their fault?  No, they double down on denial and then shift gears to vile tweet about a dead conservative blogger.

5 Responses to An Example Of Liberal Tactics