Paul Krugman Loves Him Some Keynes 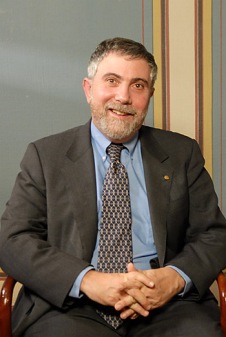 On NPR today, Paul Krugman gave an interview and talked about how the US is experiencing more than just a difficult recession but instead he equated the current US economic situation to the Great Depression.  The two paragraphs below from the NPR story are the only words I heard from Krugman today that I agreed with.

“Krugman says he uses the term depression to describe today’s economy because “it’s qualitatively similar to the Great Depression.” He tells NPR’s Robert Siegel, “It is a sustained period of really lousy economic performance and an enormous amount of suffering.”

“Krugman worries that we’re becoming accustomed to this reality. “We’ve kind of settled into the notion that this is the new normal,” he says. “But it shouldn’t be. And it’s not something we should accept.”

We are indeed in a period of lousy economic growth and we should not accept these current conditions as the new normal but instead call on our American exceptionalism to strive to do better.

The rest of the interview has Krugman channeling the spirit of John Maynard Keynes and saying the government isn’t spending enough.  Some pertinent quotes from the NPR interview are below with emphasis mine.

“But now we know what works, says Krugman. Which is why he became so frustrated when Democrats pushed through a stimulus package he believed was far too small. “I, among other people, was screaming at the time, tearing my hair out very publicly in the Times,” he says. “We had an epochal financial shock … and we responded to it with a policy that was really quite modest — that was not nearly enough to offset that shock.”

Krugman thinks the 2009 American Recovery and Reinvestment Act that ran up our debt by another $787 billion wasn’t enough.  Remember that Obama’s economic advisors told him that this stimulus was needed to keep the unemployment rate below 8.0% and we all know how well that worked out.   It’s hard to understand how doubling down on failure would have improved our situation but that is what Krugman is saying.

Krugman also thinks that it was a mistake to cut back on government payrolls and we should reverse this trend over the past couple of years when local and federal governments have trimmed the fat.  It boggles the mind how anyone can say that America is better off when we have more people under government payrolls but we have to consider the source here.  Remember Krugman is a proponent of the broken window stimulus fallacy which has been debunked here and here.

“So, people have said about the 1930s that Keynesian policies didn’t really work because they weren’t really tried, and that applies with extra force to this depression.”

“Though Krugman thinks the solution to our current depression is simple economics, he concedes that politics is never simple.

“It would be nice if we had a political system in which important figures from both parties understood textbook macroeconomics, because that’s all we’re talking about here,” he says. “The odd thing is I’m not a radical. I’m actually calling for believing your Econ 101 textbooks and acting on what they say.”

Krugman thinks that Econ 101 teaches us that government spending will spur economic growth and all we need to do is follow this simple advice.  He also believes that the recovery of the 1930’s wasn’t due to Keynesian policies because even the massive government intervention in the wake of the New Deal wasn’t true Keynesian since it didn’t go far enough.

I won’t get into what got us out of the Great Depression but let’s say for the sake of argument that massive government spending did help rescue us from that economic collapse.  The US debt situation in the 1930’s was much different than the situation today and you can see that from the following graph of US Debt as a percentage of GDP (this data was obtained from the US Government Spending website).

Keynesian economics is a fallacy because it takes money from citizens and gives it to the government to spend in a manner that would not be done in the normal Free Market.  The money doesn’t materialize out of the vacuum of space but must be taken from citizens or borrowed from other countries and neither is a valid option at this current time in the US.

6 Responses to Paul Krugman Loves Him Some Keynes