The Future of Occupy 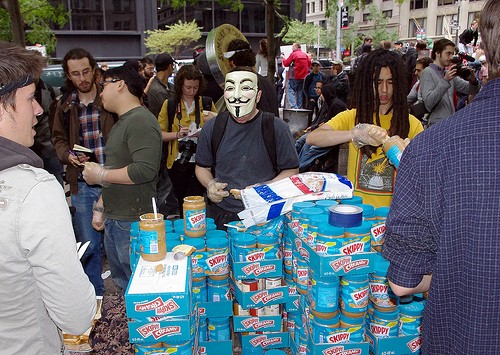 Did a Corporation  produce all that Peanut Butter for these Anti-Capitalist kids? Photo Credit – IBTimes New York – Link-> http://newyork.ibtimes.com/articles/216365/20110919/occupy-wall-street-protest-photo-manhattan-new-york.htm

What exactly is going on with the Occupy movement now and what do they hope to accomplish?  I ask this question not because I’m hoping Occupy continues to grow (I don’t) but because I want to know what Occupy’s end-game looks like so I can call them out on their BS in case they try to disguise their true intentions.

We saw the temper tantrum of Occupy last year when they decided (from what I could gather) that someone needed to give them money because their liberal arts degrees weren’t allowing them 6 figure salaries right out of college (although they could afford iPhones, iPads and other high dollar electronics).  The crimes that were committed at these ‘peaceful’ protests were documented , the Occupy organization had shady financial practices,  Democrats came out and supported them and we know that Union thugs supported them as well.

Once cold weather set in, they disbanded and the net results of the Occupy movement was exactly nothing but that won’t deter a group of people set on the destruction of Capitalism.  The Occupy movement has recently been rebranded “National Gathering” (or #NatGat in Twitter) and @soopermexican blog has a couple of great posts showing the lunacy of their protests here and here.

From my viewing of tweets from #NatGat, I discovered a website that focuses on the future of the Occupy movement and I’d like to use this blog post to reveal what this group’s intentions are.

“The list of criteria presented below grew out from our recent conversations with others who are active in the movement, and it is subject to ongoing interpretation, questioning, and dialogue. It will serve our work as shared reference until its next update, based on the input from all users/contributors of this site.”

“Occupy-related materials that we currently include in the content published or re-published here should meet one or more of the following content criteria.”

1.       Pertinent to the evolution of the movement and its capacity to meet challenges and opportunities of increasing scale. That criteria especially includes content related to enhancing our capacity to deal with the complexity of larger issues.

4.       Raising public awareness about the significance and strategic options of the structural changes that society is going through, with fresh perspectives.

5.       Reflecting the movement’s potential to advance the building of new institutions capable to overcome the democracy deficit of the current establishment.

Most of this crap is high level double speak with no real meaning but #3 was the first statement that got me curious so I checked out their “commons-based society” page.

First of all, let’s look at what is meant by a “commons-based society” and we see a definition from this link and it is pasted below with emphasis mine.

“A commons-based society refers to a shift in values and policies away from the market-based system that dominates modern society, especially over the past 30 years. The foundation of the market is narrowly focused on private wealth, while the commons is built upon what we all share—air, water, public spaces, public health, public services, the Internet, cultural endowments and much more.”

“One of the most compelling ideas being raised today is the possibility of evolving from a market-based society to a commons-based society. The commons has always been an element of human civilization. But its central role in sustaining all societies has recently been rediscovered, inspiring new lines of thinking in fields ranging from high technology to public health to business.”

This sounds a lot like Socialism to me, what do you think?  Abandoning a Free Market system and moving to a socio-economic system that removes private wealth (i.e. ownership) and replaces it with public ownership is the definition of Socialism.

The Future of Occupy website also has a link to a page touting Marx as a leading thinker in the commons-based society but criticizes Marx for not going far enough in his Socialistic thinking.

“While Marx’s great insight was that labor is embedded in the commons, his awareness of the biosphere was limited to material and social resources. In deriving his major ideas on the production process directly from the capitalist system instead of from the broader commons, Marx’s focus was primarily on the ownership of production, rather than the trusteeship of co-production and co-governance in a commons-based society. Today, we are recognizing that the commons is much broader than just labor, which is why the co-production of the commons has been emerging as such a vibrant phenomenon beyond the clutches of the Market State. And that’s really my basic point in mentioning Marx in this passage.”

From the economics section of this Future of Occupy website we see another call to abandon Capitalism and move to another economic system.

“Together we can build a New Economy that Works for All, enabling each of us to meet our material, relational, and spiritual needs in ways that affirm and embody our basic values. Far from being some utopian dream, it is in fact part of the basic inheritance of being human. For as long as we have been social beings we have been sharing our gifts. Right now, around the planet, people are modeling both new and traditional networks of exchange that have justice and generosity at their core. New Economies are already emerging through the hearts, minds, and hands of millions of people across this Earth.”

If you scan back to the 5 bullet points that Occupy claims to represent their core points of view, you’ll see where #5 is also hinting that we need a new political system to back up this new economic system.  Using their own words, they support the:

“Building of new institutions capable to overcome the democracy deficit of the current establishment.”

This statement sounds like Occupy doesn’t like our Republic form of government and wants to move away from that.  I wonder what they have in mind?  What form of government would complement the economic system of Socialism?  I guess we’ll have to wait for the Occupy kids to drop that bombshell on us.

From the evidence given above, it should be clear to anyone that Occupy’s main goal is to replace Capitalism with Socialism.  Occupy will not publically come out and make this claim but make no mistake about it, this is their goal.  For this reason alone, it is the duty of every American to publically humiliate any Occupy supporter because their ideology is in direct opposition to American principles.  Do not let them sugar coat their message and lie about Occupy’s true intentions.  They are a cancer to America and they must be destroyed.

2 Responses to The Future of Occupy