As I stated earlier this week, the SCOTUS decision on Obamacare should have awoken all Conservatives for the 2nd time but what are we going to do now that we’re awake?  Yes, I know, we need to fight the Left but that could mean many things.  The failures of Leftist policies are legion and Team Obama is counting on us getting confused and overwhelmed with their all out assault on our Freedoms.  We will never be successful with the shotgun approach (fight them on all fronts) so we must pick and choose the battles where we have the good ground and as fate would have it, those battles are the ones that really matter the most for the future of the United States.

I’ve compiled a list here that I use as guideposts to keep me focused and fight the Left on what really matters.

Contrary to what Obama said last month, the Private sector is not doing fine.  See the following graph showing how this recession differs from the prior three in relations to jobs recoveries.  Keynesian economic principles aren’t working and anyone who defends them shouldn’t be taken seriously. 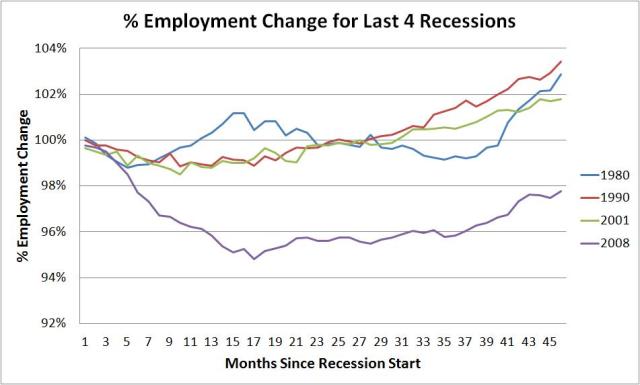 Obama will try to make Americans forget that he has been President for almost 4 years and had super majorities in the House and Senate for part of that time.  He had power to enact any bill/law he saw fit to get us out of this recession and now all his plans have played out it is obvious they were a miserable failure.  His policies were failures by not just my standards but by Obama’s economic team’s standards as well.

At the beginning of 2009, Obama was trying to build support for his massive $787 billion stimulus program and he touted the report from his own economic advisers that we needed this ‘shovel ready’ stimulus bill to keep unemployment below 8%.  Here is a plot of that graph from the original report with real unemployment numbers added in red by Jim Pethokoukis.

That is an epic failure on two fronts: 1) not recognizing the severity of the recession and 2) not recognizing what policies need to be enacted to fix the problem.  Both of these are inexcusable for a person who occupies the leadership of the Executive branch of our government.  On the job training is fine for many professions in America but the job description for Leader of the Free World doesn’t allow for an internship.

Another fact to keep in your arsenal to fight Leftists lies is the one in early February where Obama’s chief economic advisor came out and admitted that they now owned the economy.  No more of this ‘Blame Bush’ nonsense.

Socialized medicine doesn’t work and we have cautionary tales from other countries who have instituted programs similar to Obamacare – wealthy citizens bribe doctors to move to the front of the line, long wait times, people are seeking surgical care outside of their own country,  20% of the hospitals are failing financially and healthcare is rationed in favor of those who can pay privately.

Even before Obamacare has been fully implemented, we see that cost estimates for the program have almost doubled, jobs are being lost and regulations are causing citizens to die due to delayed or denied treatment.

We need healthcare reform in the US but Obamacare makes the situation worse and the law must be repealed and replaced but that will only happen if Obama is defeated and Harry Reid loses control of the Senate.

Out of Control Entitlement Spending

Social Security is on a destructive path and left unchanged will escalate to a point that is catastrophic.

Welfare is on a similar trajectory and must also be dealt with before it is too late. 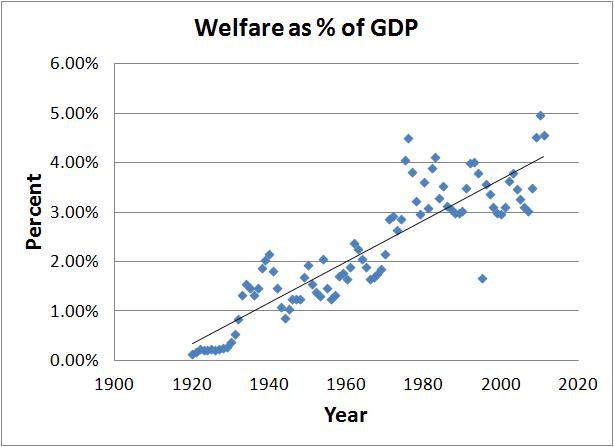 These programs are the elephant in the room that is ignored by Leftists and this is not only irresponsible but borders on criminal when we think of the future we are leaving for our children.

Instead of bringing the country together, Obama chose to divide us and generate a fictitious income inequality meme that tells us that the wealthy aren’t paying their fair share.

Here is a comprehensive collection of links debunking that lie from Obama and other Leftists.

Here is a graph showing what percent of Federal Income taxes that are paid by each economic demographic group in the US and it’s clearly evident that the wealthy are paying more than their fair share.

Leftists like to rail on fat cat corporations but aside from the fact that the US has the highest corporate tax rate in the world, the evidence is clear that large corporations pay more than their fair share in Federal taxes.  From a Forbes article in 2011:

Here is another link showing where Exxon paid more than their fair share in taxes during 2011:

“In effect, Exxon Mobil paid 71.2% of its pretax profits, or $104.5 billion, in sales based taxes, other taxes and duties, and income taxes, before it was able to take home 28.8%, or $42.2 billion. If 71.2% isn’t enough for left-wing radicals, then how much is enough? Is profit a dirty word? Exxon Mobil is a producer, and the more leeway granted to the productive, the more wealth is created. If the government takes even more capital away from producers like Exxon, who would radical left-wingers propose it be given to? Is there another entity around that can turn higher profits than Exxon Mobil? Left-wingers have it all backwards.”

Under the first term of Obama, our national debt has increased by $5 trillion (more than all 8 years under Bush 43).  Our Debt to GDP ratio is now over 100% for the first time since WWII and we have Leftists to blame for this and specifically Obama.

The Left tries to play tricks with the data but there is no getting around the fact that Obama is a big spender.

No matter how the Left will try and divert the American voters from these 5 key topics, I will stay on topic and hammer them on the failures of not only Obama but the entire Liberal philosophy that has gripped our nation over the past few decades.  It ends here and we start turning the corner in November.  Stay focused and hit the Left on the issues that really matter.

This entry was posted in economics, Entitlement Programs, healthcare, politics. Bookmark the permalink.

3 Responses to OK Conservatives, Now What?