I have already written earlier how Obama and his henchmen (and henchwomen) are not only killing business but also killing American Citizens and just a few days ago came a new report from the DesMoines Register showing the damage that is being left in the wake of the coming Obamacare nightmare.  Witness the carnage below (all quotes are taken from the DesMoines Register article).

“Stryker executives last month announced plans to shed 5 percent of its workforce and blamed a 2.3 percent tax on medical device sales that goes into effect in the United States in 2013.”

“A 2.3 percent tax may not seem like much. After all, sales taxes are double or even triple that amount. But this is a top line tax on sales, and it translates into a 15 percent tax rate when applied to earnings. Add the 35 percent existing corporate tax and an average of 5 percent in state corporate taxes, and the combined tax rate for a U.S. medical device company hits 55 percent.”

This announcement can’t be more direct as to why these American citizens are losing their jobs.  For many companies, a 2-3% additional tax represents their entire profit margin for the year so adding this tax on the business will cause them to make choices about whether to stay in business or not.  This is not the case for Stryker who has a profit margin of 16% but taking their sales down by 2.3 percentage points is equivalent to removing close to 15% from their bottom line earnings (2.3% divided by 16% is 14.4% reduction in profits).  Companies can’t withstand that kind of reduction in earnings per share and the Market would destroy them and bring their Market Capitalization down to dangerous levels.  Something has to offset these reductions in profit so the company lowers costs by cutting its workforce.

Is this what Barrack Obama meant when he promised to pivot to Jobs?

Imagine if you are a company attempting to attract investors for your startup and at the end of the pitch you mention that you’ll be taxed at 55%.  That means the investor will not see any money until the company pays 55% of their earnings to Federal and State governments.  Is this the type of return on investment that investors have been accustomed to?  Of course not and we will rapidly see a decrease in small business startups in the medical industry and this will neuter a major job growth machine in the US.

“Investors are already headed for the door. BioEnterprise Midwest Healthcare Venture Report recently found that healthcare startups in the Midwest secured $315 million in investments during the first half of 2011 — that’s down an incredible 24 percent from the same period last year.”

“Cook Medical, the nation’s largest privately owned medical device company, has shelved plans to build a new factory annually in the U.S. — plants that would be similar to the one we opened last year in Canton, Ill., and would have cost about the same as our annual bill from this new tax.”

Is this what Harry Reid intended when he compared opponents of Obamacare to supporters of slavery?

“Stryker is not the only company reducing workforce to pay for these punitive taxes leveled against medical device companies in the Obamacare bill.”

“Besides Stryker, Covidien, CR Bard, Medtronic, Boston-Scientific, Zimmer and others have recently announced plans for workforce cuts or job relocations off-shore of about 1,800 jobs.”

What areas of the workforce are suffering from these reductions?  A company will not sacrifice manufacturing or sales force jobs since they’ll need those individuals to generate revenue so the cuts will most likely come from Research and Development.   What do these reductions in R&D mean for the companies and the average American citizen?

America has long prided itself on having cutting edge medical devices (pace makers, stents, implantable cardioverter defibrillators, insulin pumps, etc.) but you can forget about that since the product development pipeline will dry up as companies are forced to remove dollars and headcount in this area.  Companies will be forced to focus on the short term revenue streams and abandon long term product development initiatives and medical care will move into a stagnant period where innovation is dormant.

Not that product development has had any luck in this current FDA environment anyway but it will get even worse in the coming years.  American citizens will be forced to travel abroad to receive state of the art medical treatment but that will only be for the wealthy and those who voted for Liberals will be forced to deal with the very real Death Panels.

And it takes years to develop new medical devices so even if we repeal Obamacare in 2013 and change the Regulatory environment don’t expect new products to hit the Market for several years.  How many American citizens will pay the ultimate price (their life) for the “mistake” that we call Obamacare?

Is this what Nancy Pelosi meant by saying that we needed to pass Obamacare to find out what was in it? 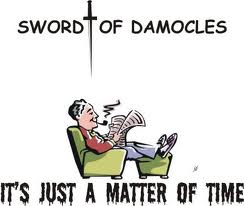 I have often referred to Obamacare as a Sword of Damocles hanging over the head of not only healthcare providers and medical device manufacturers but all American businesses.  For those not familiar with Greek mythology, Damocles realized that a sword, being suspended by a single horse hair, was hanging over his head and could fall at any moment.  This is an accurate analogy of the damage that Obamacare threatens to our economy and it appears that the sword has already started to fall on many of our citizens.  How long will we allow this to happen before it is repealed?

This entry was posted in healthcare, Over Regulation, politics. Bookmark the permalink.