To many of us who live in the real world and understand math this next statement shouldn’t come as a shock to you – Increasing Medicare and Medicaid spending does not reduce Nationwide health care costs.

But alas, there are still many Leftists who labor under the delusion that adding more people onto an already over burdened system such as Medicare/Medicaid would somehow reduce the amount of money we spend as a nation on health care.

It is now known that only about 100,000 people have signed up for insurance on the Federal and State exchanges since the Obamacare website became ‘live’ on 01-OCT-13.  This falls way short of the goal and any thinking adult would see this as a disaster but I saw this tweet tonight from @stevebenen (producer for Rachel Maddow show).

About 500k Americans gained health coverage under ACA in Oct. Republicans are arguing (a) this is too few and (b) this is too many, Hmm.

I questioned where this 500,000 number came from and he responded.

@gdthomp01 From HHS. http://t.co/rjlJTLe3Um It's the combined total: 106k through exchanges, 396k through the ACA's Medicaid expansion.

And I stated that this should not be cause for celebration but he thinks otherwise.

@gdthomp01 We'll have to agree to disagree. In my reality, the uninsured rely on emergency rooms & cost the system dearly. Medicaid saves $

The Leftist theory that adding uninsured onto a government health care plan will cause them to seek preventative care vs. the higher cost emergency room care is great in theory, but that theory falls apart in the real world.

Adding around 400,000 (and a lot more in the future) people to Medicaid will NOT reduce the US health care costs and that is easily proven with historical data. 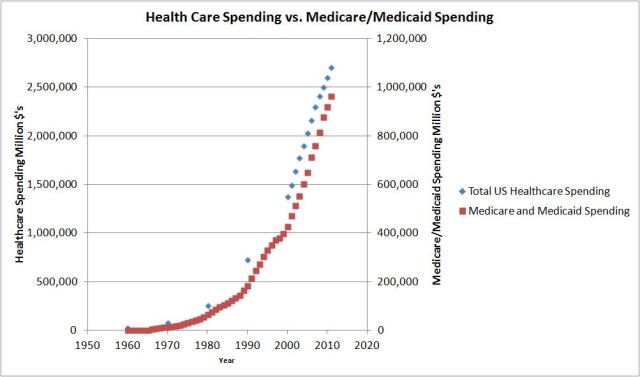 Leftist continue to cling to the notions that people will act in the best financial interests when they are spending other peoples’ money.  Unfortunately, that is not the way we’re wired.

This entry was posted in Entitlement Programs, healthcare, politics. Bookmark the permalink.

14 Responses to A Leftist Dream Shattered