The Left appears very organized in the way they are presenting our fiscal situation and as expected, “journalists” are reprinting the talking points unchallenged.

Have you missed it?  Team Obama is trying to cast The One as a very austere POTUS over the past few years and they are doing this by saying Obama has cut the deficit in half.

Here is an example from NPR’s Mara Liasson (emphasis mine):

In President Obama’s State of the Union address last month, he all but declared victory on the federal deficit. He ticked off the country’s accomplishments: a housing rebound, more manufacturing jobs and “our deficits cut by more than half,” he said.

The annual budget deficit has indeed decreased from 9.8 percent of the country’s gross domestic product when Obama took office to 4.1 percent now, according to the Congressional Budget Office.

This is the very short (and unchallenged) fact that we’ll hear over and over again as we are coming up against the next debt ceiling fight and the mid-term elections.  Watch as this short sentence will be the extent of the “reporting” on this topic because apparently journalists seemed to have lost the ability to look at our deficits past 2009.  Do you think it might be worth looking at the deficits under Obama and compare them with the deficits of say the last couple of decades?

Here is a graph using data from the Office of Management and Budget (OMB) which is very similar to the CBO data quoted in the NPR article.

Notice anything significant that happened under Obama’s first year in office (2009)?  Yea, we’ve basically cut the deficit in half by using 2009 as the base year but we’re still running a deficit that is WAY above anything we’ve seen over the past 20 years.

Let’s give Ms. Liasson the benefit of the doubt and say she was busy and didn’t have time to graph this for herself.  She referenced the CBO report in her article and there is a table at the very top of that report that lists the budget deficits for 2008 – 2013 and that should’ve raise at least a yellow flag for this veteran reporter.  Note the two red circles!

Did you notice that Ms. Liasson used the phrase “when Obama took office” when she told us that the 2009 budget deficit was 9.8% of GDP?  That’s done so you make the assumption that the 2009 budget deficit was due to Bush and not Obama.  Conveniently, she fails to mention the $787 billion stimulus package that Obama and the Democrat controlled House and Senate sailed through in early 2009.  You can see from the following graph that without that $787 billion in extra spending in 2009, that year’s deficit would have been almost identical to 2008’s deficit. 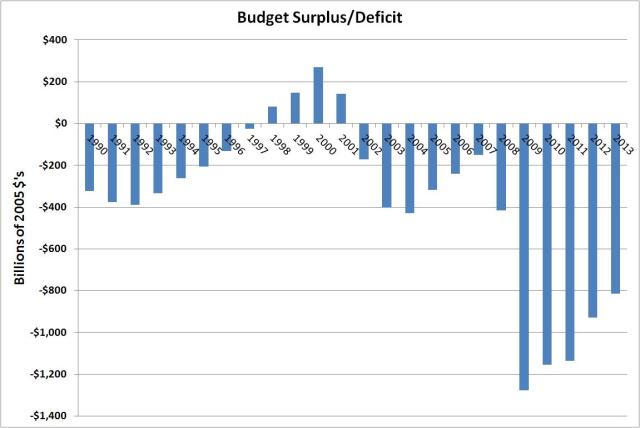 Why will we see the State Run Media regurgitate this talking point without challenging it?  Are the reporters just lazy?  Do they lack the mathematical ability to analyze tables and graphs?  Do they have lousy memories?

No, I don’t believe any of those excuses.  Simply put – They’re hacks.