The Crux of the Election

The National, State and Local elections this November can be distilled down to a choice between one of two philosophies:

1 – You believe that individual Liberty, as manifested in entrepreneurship and innovation, drives wealth creation and provides the best means for a society to prosper and provide tax revenue for the Government.

2 – You believe Government stimulates businesses that will eventually create jobs and wealth and the people are indebted to the government for this benevolent role.

In case you have been living under a rock the past 3+ years and are still confused about which philosophy Obama subscribes to, he told us at a recent campaign rally in Roanoke, Virginia. 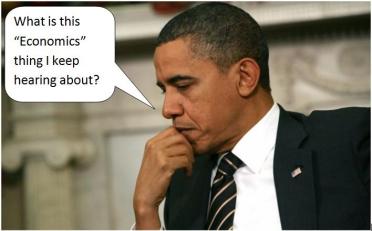 “There are a lot of wealthy, successful Americans who agree with me – because they want to give something back,’ he said. ‘They know they didn’t – look, if you’ve been successful, you didn’t get there on your own.”’

“You didn’t get there on your own. I’m always struck by people who think, well, it must be because I was just so smart.”

Obama doesn’t seem content with the current class warfare rhetoric so he is joining with Elizabeth Warren and doubling down on her idiotic comments she made last year: 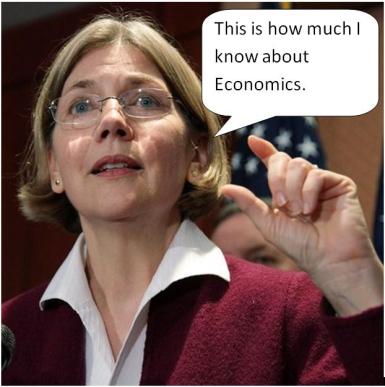 “I hear all this, you know, ‘Well, this is class warfare’, this is whatever. No. There is nobody in this country who got rich on his own — nobody.”

“Now look, you built a factory and it turned into something terrific, or a great idea. God bless — keep a big hunk of it. But part of the underlying social contract is, you take a hunk of that and pay forward for the next kid who comes along.”

What total douchebaggery!  So the roads were paid by “the rest of us” but she conveniently left out the fact that businesses paid taxes for those roads too!  She also omitted that the people who were employed by those businesses also paid taxes to help fund those roads.

For a man like Obama, who has never held a job in the private sector, let alone start a business, it would be foreign to him how a person could start a business and make it successful based on hard work and innovation.  A person who prefers a Socialistic economy would embrace the fact that individual contributions are impossible without the entire collective of the nation helping him out.

The Daily Mail had a great article rebuking Obama’s ignorant comments and here are a few quotes.

“In a hard-hitting statement to Mail Online, the National Federation of Independent Businesses (NFIB) president Dan Danne said: ‘What a disappointment to hear President Obama’s revealing comments challenging the significance of America’s entrepreneurs.”

“Mr Danne added: ‘His unfortunate remarks over the weekend show an utter lack of understanding and appreciation for the people who take a huge personal risk and work endless hours to start a business and create jobs.”

“Andrea Saul, spokeswoman for Romney, told Fox News that the remarks ‘reflect just how unqualified he is to lead us to a real economic recovery’ and were ‘ insulting to the hardworking entrepreneurs, small-business owners, and job creators who are the backbone of our economy.”

“An NFIB spokesman added: ‘I’m sure every small-business owner who took a second mortgage on their home, maxed out their credit cards or borrowed money from their own retirement savings to start their business disagrees strongly with President Obama’s claim. They know that hard work does matter.”

“He added: ‘Every day millions of people put their lives, savings, houses and families on the line and work 20 hours a day just to grab their small slice of the American dream. Where is the collective when all of this is going on? And if the collective is really responsible for success, how come everyone isn’t successful?”

A central piece to the class warfare meme is the straw man argument that Leftists attempt to build which states Conservatives are against all taxes.  Not True!  Conservatives see it as their duty as a citizen to pay their fair share of taxes which will allow the Government to carry out its constitutional duties and that includes building roads/bridges, providing for the common defense and paying Government employees to carry out those duties.  As I’ve shown before, over 90% of our federal income tax dollars goes to fund Social Security, Welfare, Medicare, Medicaid and Unemployment benefits so is this really how we want to run a country?  Conservatives don’t agree with the way the Government is using our tax dollars and we must realize that the United States doesn’t have a revenue problem but instead has a spending problem.

The election in November comes down to a classic chicken and egg scenario.  Which came first?  The Government or the Free Market?  Obama and the Leftists believe that Government is supreme and is the driving force in this economy but Conservatives believe that the Free Market creates both a climate and motivation for individuals to take a risk and then get rewarded based on their hard work and innovation.  Once a company is successful and turns a profit, they then pay taxes and create jobs (which create more tax revenue) that not only grows the national economy but provides funds for the Government to fulfill its constitutional duties.

Obama, Warren and the rest of the Leftists are dead wrong about economics and they should be sent packing in November.

12 Responses to The Crux of the Election