So much for the pundits who said debate performance doesn’t matter –  From Real Clear Politics:

From two of the latest four polls that I could access without subscriptions, the IBD/TIPP poll had a D/I/R sampling of 39%/30%/31% (D+8) and the Pew Research poll had a D/I/R sampling of 34%/31%/35% (R+1).  This means that Romney is beating Obama in polls that are weighted in favor of a higher Democrat to Republican ratio than is expected in November based on this poll.

And when registered voters were asked the same question, there were similar results.

Of course Conservatives have been diving deeper into the polls for weeks warning people to not accept the headlines without looking at the polling sample to determine party identification but Leftists in the media were strangely silent about the large +D sampling in polls over the last few weeks.  But now that the polls are showing Romney ahead, the MSM types like Chuck Todd were quick to tweet about political ID. 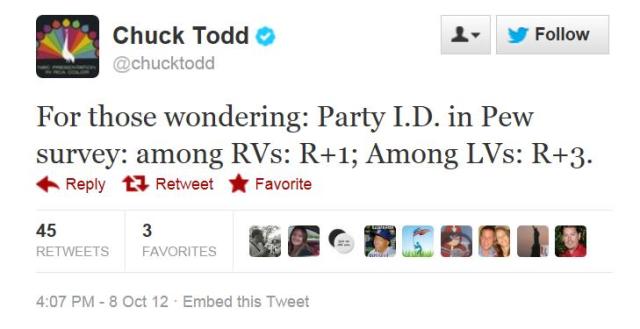 I guess I missed Chuck’s tweets about this poll that had Obama up 50% to 45% with a D+7 sampling.

Romney is starting to surge now that Americans are allowed to see the stark contrast between Romney and Obama now that the MSM filters have been removed during head-to-head debates.