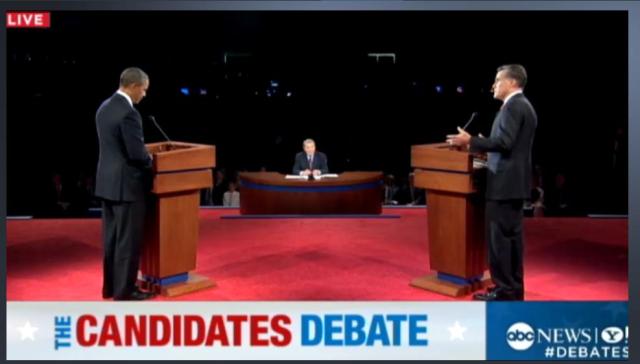 Obama seemed like a tired and dejected shell of a man on the stage tonight and only the most partisan Leftist will disagree with the fact that Romney clearly won the first Presidential debate tonight.

The tone was set by Governor Romney in his rebuttal of Obama opening debate comments where he spewed the standard talking points of the Left.  From the debate transcript:

“MR. ROMNEY: Well, sure. I’d like to clear up the record and go through it piece by piece.”

“First of all, I don’t have a $5 trillion tax cut. I don’t have a tax cut of a scale that you’re talking about. My view is that we ought to provide tax relief to people in the middle class.”

And then again toward the end of the debate:

That simple debunking was followed every time Romney spoke and it was clear that he was going to challenge every lie that Obama said.  This ruthless attack of the President’s talking points seemed to take a toll on the President and toward the end of the debate he was even conceding some of Romney’s points in fear that he would be smacked down further.

Obama admitted that Romney’s plan would not end Medicare, which is a Leftist talking point”

“Now, in fairness, what Governor Romney has now said is he’ll maintain traditional Medicare alongside it.”

Here is Obama admitting that there is a panel of unelected officials who will oversee Obamacare (emphasis mine):

“It — when Governor Romney talks about this board, for example — unelected board that we’ve created — what this is, is a group of health care experts, doctors, et cetera, to figure out how can we reduce the cost of care in the system overall, because the — there are two ways of dealing with our health care crisis.”

During the debate, Obama was no longer speaking in large auditoriums filled with supporters or in the White House briefing room filled with water carrying ‘reporters’ who lobbed softball questions at him.

This undressing of the emperor is what happens when the facts of Obama’s first term as US President are laid bare for all to see with no filtering from the Main Stream Media.  It was a thing of beauty to behold and even MSNBC had to concede that Romney won.

This is the Romney that was battled hardened in the long Republican Primary that had numerous debates and those who agonized over that protracted battle should now see the wisdom in such a process.

Let’s hope the continued undressing of the emperor continues and the American people finally get to see what a failure the past 4 years have been.

8 Responses to Obama Beat Down