Obama Has Owned the Economy For the Past Two Years

The Bureau of Economic Analysis (BEA) released the Q2 GDP results and the US economy grew by 4%.

And of course Obama took the opportunity to claim ownership of this economy and state that this increase was because of his economic policies.

“So the decisions that we made — to rescue our economy, to rescue the auto industry, to rebuild the economy on a new foundation, to invest in research and infrastructure, education — all those things are starting to pay off.”

DO not be deceived, this isn’t the first time that Team Obama has claimed ‘ownership’ of the economy. Remember that back in February 2012 his chief economic advisor took credit for the January jobs numbers:

“Further evidence that the economy is continuing to heal from the worst economic downturn since the Great Depression,” said a statement from Alan B. Krueger, Chairman of the Council of Economic Advisers.

“It is critical that we continue the economic policies that are helping us to dig our way out of the deep hole that was caused by the recession that began at the end of 2007,” Krueger wrote on the White House blog.”

Team Obama drew the correlation between the good jobs data in January 2012 to their own economic policies so, by their own admission, Team Obama has been responsible for the economy since the start of 2012. Let’s look at the BEA data to see exactly what Obama has owned for the past 2 years.

The following graphs show the economy that Obama owns (shown by the red ovals): 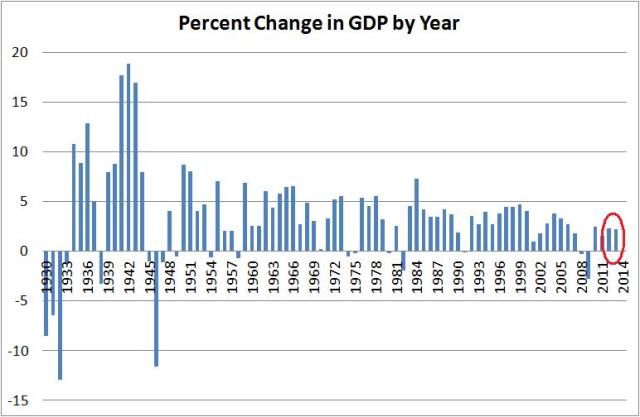 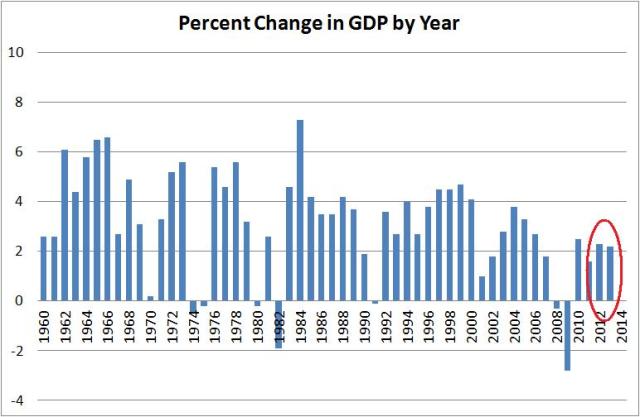 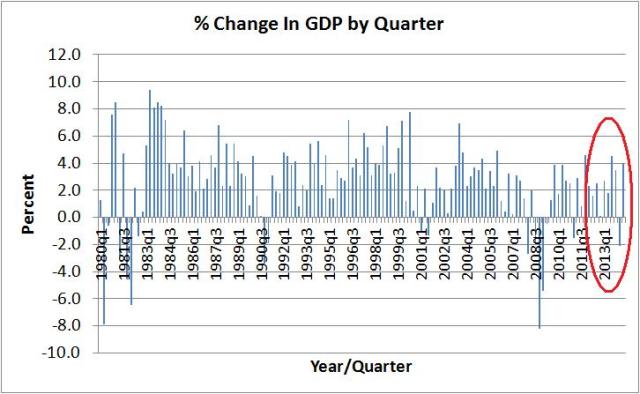 But wait, Leftists like to claim that we came out of a horrible recession so we should give The One some credit!

Unfortunately for the Leftists who parrot this talking point, the GDP data of US recoveries from recessions during the 20th century debunk that argument.

Look what happened in the early 80’s when we came out of a similar deep recession: 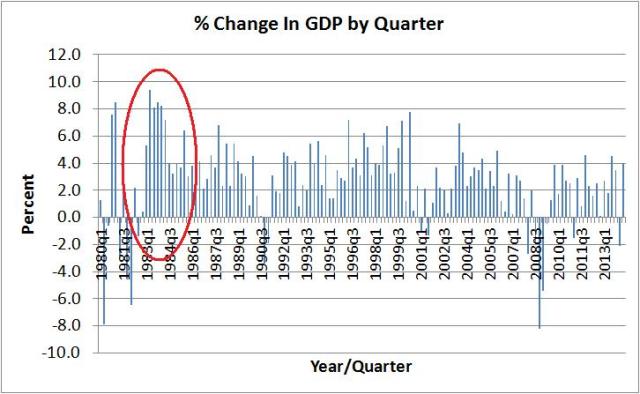 Pro-business policies from Reagan produced a huge rebound from that deep recession. And this recovery was similar to other rebounds from recessions – the deeper the recession, the larger the rebound.

We have not seen the dramatic recovery for the past 2 years that 100+ years of economic data predicted would happen. Instead we have a pitiful 2% average GDP growth rate over the past two years.