Solutions In Search Of Problems – Part 23

Apparently all the big problems have been solved because the Obama administration has moved on to proposing solutions for fake problems:

Today the White House delivered an ambitious target for cutting emissions of greenhouse gases. Those gases contribute to climate change. The commitment is part of a global effort to forge a new treaty to protect the climate. NPR’s Christopher Joyce has more. CHRISTOPHER JOYCE, BYLINE: The next big thing in international climate negotiations takes place next December in Paris. The United Nations will try to get every country – rich and poor and in between – to set a target to cut greenhouse gas emissions. Today President Obama officially put his cards on the table – cut emissions 26 to 28 percent below their level in 2005, and do it in 10 years. White House adviser Brian Dietz was quick to point out a press conference that the U.S. has already lowered its emissions, even as the economy has grown.

Never mind that satellite temperature measurements of our atmosphere have been flat since 1997:

And by all means, don’t worry about the fact that there is zero correlation between atmospheric CO2 concentrations and global temperature anomalies: 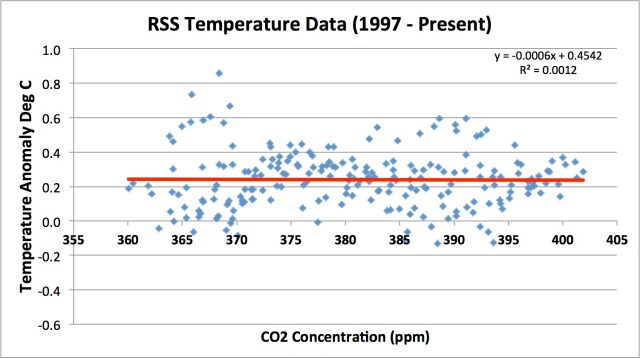 We are governed by children.

2 Responses to Solutions In Search Of Problems – Part 23