I had a previous post where I questioned why my morning blood sugar measurements were higher than normal and I had posited that this was due to the Dawn Phenomenon but I think there may be something else at play here.

Before I dive into this data, let me share a graph that shows multiple blood sugar measurements during a day back in March of 2015. 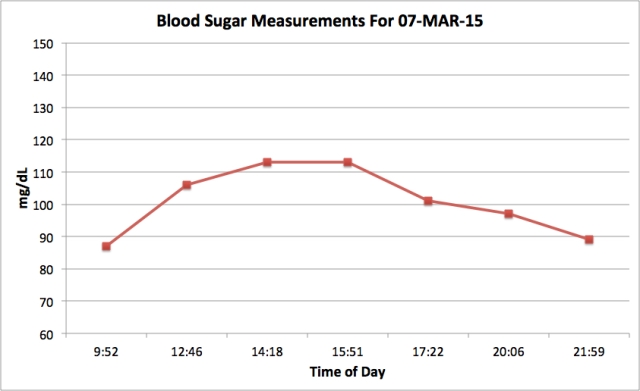 As you can see, my blood sugar levels stayed very consistent through the day and never rose above 120 ug/dL even after a meal. This data validated that the Paleo lifestyle that I had been leading controlled my Type 2 diabetes without the help of medicine and that my blood sugar levels were indistinguishable from someone who didn’t have Type 2 diabetes. Normal blood sugar measurements should be less than 100 mg/dL at a fasting level (when I wake up) and not increase above 150 mg/dL 2 hours after a meal and that is exactly what my measurements show even though I have been diagnosed with Type 2 diabetes.

But as I mentioned above, something has changed and now my blood sugar levels are not consistent with someone who doesn’t have Type 2 diabetes.

So let’s see what the data looks like recently. 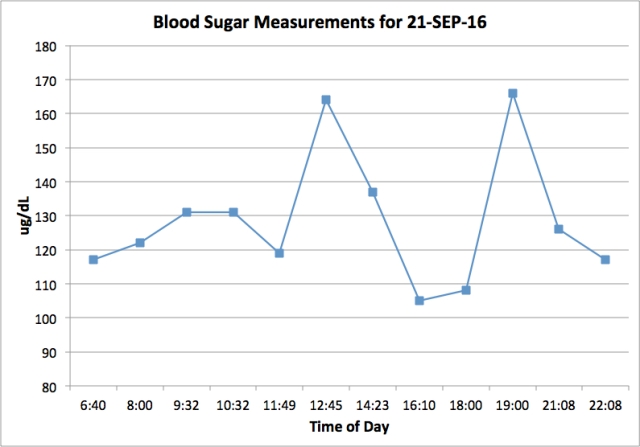 First off, notice that my blood sugar levels started off elevated and ended elevated as compared to the graph from 2015. This data proved to me that my elevated blood sugar measurements in the morning were not due to the Dawn Phenomenon but due to something else. Note also that this is a conclusion that I would not have been able to make until I did this experiment. Taking your blood sugar measurements only in the morning doesn’t reveal what happens during the day and this is further evidence that folks with Type 2 diabetes need to take more measurements than their doctor normally prescribes.

There were two spikes that should be investigated and maybe these will provide clues to the source of my elevated fasting blood sugar measurements.

The first spike occurred about 15 minutes after I finished exercising during lunch (run 800m, lift weights upper body, lunges with weights and then finish with another 800m run). I had not eaten lunch yet and this spike was due solely to the exercise.

I have noticed this over the past few years when I’ve taken a blood sugar measurement after an exercise so this is nothing abnormal and I think this is generally understood.

The other spike that happened before dinner is more curious.

This spike happened after I drove home from work and I was quite surprised by this but as I reflected on what may have caused this I realized that I had chewed two pieces of gum and eaten a few sour candies on the ride home and I think this was the explanation for this spike.

Over the past 6 months or so I have developed a habit of passing the long commute by chewing Cry Baby gum and eating Shockers candies and I had thought that this small amount of sugar would be negligible but obviously it wasn’t!

Although many people recoil at sour tastes, for some reason I love it (which might explain why I love Gose style beer) and the pictures and nutritional info of these gum/candies are given below.

As you can see, these items are loaded with all kinds of bad stuff including High Fructose Corn Syrup and sugar and these ‘treats’ on the ride home easily explain the spike in my blood sugar levels before dinner.

But back to my original question as to why my morning blood sugar measurements are higher than normal….

I think these candies/gums that I eat (not only on the ride home but I’ve started eating them after lunch too) have remained in my system and this might be the culprit of my elevated blood sugar levels.

I have since stop indulging in this sour treat and after a week of this I’ll see if this has an effect on my blood sugar levels.