It’s been almost 5 years since I abandoned the treatment for my Type 2 Diabetes prescribed by my endocrinologist (Janumet) and adopted the Paleo lifestyle and I’m happy to report things couldn’t be better.

I went in for my annual physical recently and my A1c is still in the high range of a normal person without diabetes (< or = to 6.0%) and this is much better than the insane guidance from the American Diabetes Association that says folks with Type 2 Diabetes should have an A1c less than 7% which they push can only be obtained through medication.

Everything in my comprehensive blood work was normal but I’d like to make a point that my triglycerides came down from a high reading the previous year (These readings should be below 150 mg/dL). 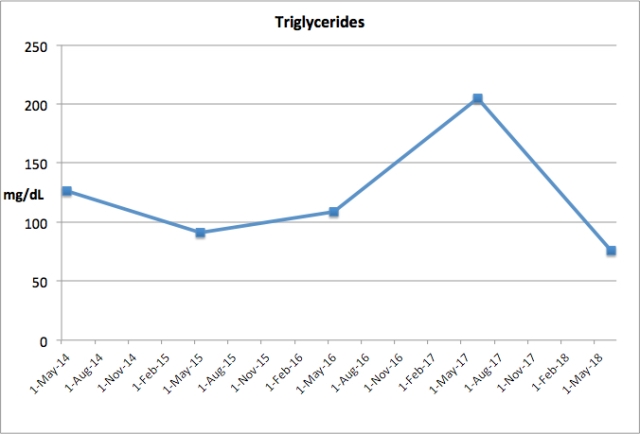 I attribute this to both the lack of exercise I had in early 2017 as opposed to the increased exercise regime I adopted toward the end of 2017 and continue today.

I signed up for a group relay race that amounted to me running two 10k legs with only a 5 hour break in between and I’m convinced that the training that led up to that race helped drop my triglycerides back to normal levels. That is the only explanation as my diet didn’t change in the past 2 years and the only variable was the amount and intensity of my exercise.

I should also note that when I was starting to train my body to be accustomed to running twice in a single day (I’ve been a runner for the past 19 years of my life and I can attest that running twice in the same day is no easy task….) I noticed that I had to deviate from my Paleo diet and eat grains and a higher level of carbs during the days I pushed myself to run twice.

At first I stuck to Paleo on the days I ran the doubles but when it came time for my 2ndrun of the day my legs were dead and I had no energy.  So allowing myself to ‘cheat’ on those days gave me more energy for that 2ndrun and my blood glucose levels on those days never strayed from levels associated with someone without diabetes – They were routinely around 100 mg/dL.  It was amazing that I could eat pancakes, muffins and pasta on those days and it was like I got a free pass!

Even with my body’s DNA, which predisposes me to be insulin resistant, increasing my exercise drastically compensated for that and my body found a way to clear the glucose in my blood stream and metabolize it in my cells.

I guess this is why you never hear of professional athletes who contract Type 2 Diabetes because their exercise regime prevents buildup of glucose in the blood stream.