What We Are Up Against

Many conservatives, like me, spend many hours each day talking politics with other conservatives at work, on Twitter/Facebook and on website comments sections and I think we lose sight of what those in the middle of the political spectrum are thinking about and we definitely underestimate the thoughts of those on the Far Left.

The worst thing we can do this year is to be smug and think the rest of America is fed up with Obama, Pelosi and Reid and will gladly kick them out of office no matter who we pick as our candidates.  The Democrats made that fatal flaw in 2004 when they, thinking that everyone hated Bush, selected an ultra Liberal candidate in John Kerry.  We know how that turned out and we are in jeopardy of doing the same thing in 2012 by insisting we select Far Right candidates who are, in reality, unelectable in a general election.

Ok, you can call me a RINO or a member of the GOP Smart Set but as I’ve stated before, decades of Liberal policies have poisoned peoples’ thinking and it will take years to reverse it.  We must demonstrate to America that true conservative policies work before Americans vote for true conservative candidates.

During tonight’s Florida debate, my wife (who is a Civil Engineer and very smart) asked me what K Street, Fannie Mae, Freddie Mac and Dodd-Frank were.  My wife represents the Center Right segment of America and we need these votes to win elections and if our candidates aren’t tailoring their message to them, then we have already lost.

We must also not underestimate the vast number of people who are Center Left who sound more like Far Left people because they get their news from the Mainstream Media which regurgitates the Far Left message.

Over the weekend I jumped into a Facebook political discussion, something that I normally avoid, and didn’t get too deep into it but I think the conversations that we had should be viewed by all conservatives.  This is what we are up against in 2012 and we better open our eyes or risk 4 more years of Obama and a Democrat controlled Senate.

The conversation is pasted below and I’ll leave it to the reader to digest it and draw their own conclusions.  I must say that many of the individuals listed on this stream are known to me and they can be considered college educated and professionals so they have the ability to think for themselves. While I interjected contrarian opinions, I respect the way they treated me and this is the way we should have our debates (although they failed to abide by one of my rules for a reasoned debate – ignoring the facts).  I have blacked out all names and pictures except my own to preserve their anonymity since I didn’t solicit their permission to publish the conversation. 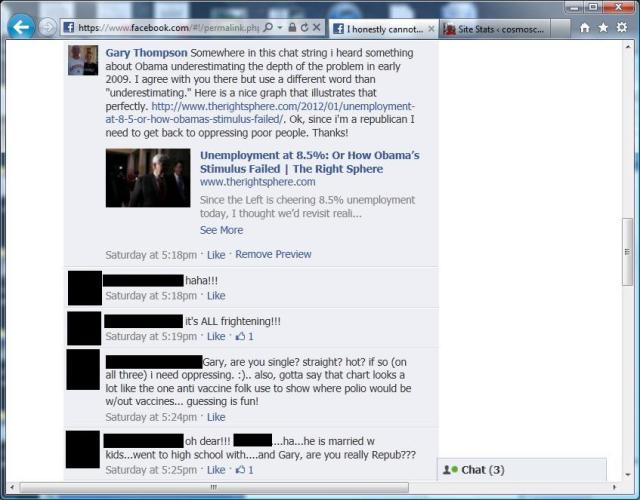 1 Response to What We Are Up Against