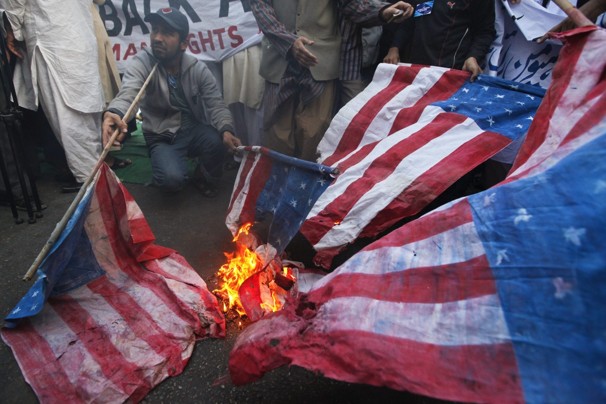 With the latest civilian killings in Afghanistan, I can safely say it is time to pull all US personnel out of this country sooner rather than later.

Details are still rolling in but here is what we do know from the Wall-Street Journal:

“KABUL—A U.S. soldier walked off his base in Afghanistan and opened fire on local villagers Sunday, Afghan and U.S. officials said, killing 16 people in a shooting spree that further complicates American efforts to end its longest foreign war.”

“The soldier, who allegedly gunned down his victims—most of them women and children—about a mile from the U.S. base in the Panjway district of Kandahar province, surrendered and is now in U.S. custody. His identity hasn’t been disclosed.”

OK, this is just awful.  I don’t want to speculate on motives here and I’ll wait for details to be released by the Military but the killing of innocent women and children in cold blood goes beyond any sense of decency in a civilized society.  I have never served in the Military so I can’t speak of the horrors of war but I can’t see any American (Military or Civilian) making excuses for these murders.

It’s not like the recent relationship with Afghans and the US Military has been described as cordial.  Just a few weeks ago 5 US soldiers burned Korans and this sparked off new levels of protests, violence and fraying of relations between the two parties.  Of course my thoughts and prayers go out to the innocent families who suffered loss but I also offer even more prayers to the US Military in Afghanistan.  Their mission just transitioned from “difficult” to “impossible” and I can only imagine what is going through the minds of each man and women in uniform over there.

I was quick to join many in criticizing Obama’s rush to apologize for the Koran burnings and my reasons were similar to those expressed in this post from Crockett Lives – Instead of apologizing for America, Obama should apologize to America.  The burning of the Korans could be justified based on the fact that prisoners were using them to pass secret messages back and forth and putting our troops and the mission in danger.  If the Apologizer-in-Chief ever needed to apologize, now is the time but unfortunately, Obama’s apology will fall on deaf ears because the President seems to make these apologies monthly to our enemies and now he is starting to lose what little credibility he had in the international community.

If we leave now the last thing Afghans will remember are the Koran burnings and the killing of innocent women and children and I believe this will embolden the Taliban in that country and create another Osama Bin Laden.  But radical Islam hates America not because of these two isolated events but because of who we are – a free nation that doesn’t follow the teachings of Islam.  That fact alone was the source of all terrorism against us so there is nothing we can do in Afghanistan now that will alter a terrorist’s world view of America.

Here is another quote from the Wall-Street Journal article that characterizes the Taliban’s mood in Afghanistan:

“The Taliban lost no time in condemning the Panjway killings, describing them Sunday as “genocide” that resulted from a U.S. night raid.  ”The so-called American peacekeepers have once again quenched their thirst with the blood of innocent Afghan civilians,” the Taliban said. The insurgents pledged to “avenge every single death inflicted by the savage murderer invaders.”

Our mission in Afghanistan is over.  We killed Bin Laden, weakened the Taliban and helped train the local police/government to run their country.  In light of the events over the past month, it is now abundantly clear that our next step should be 1) offer restitution to the families affected by these murders, 2) bring those who carried out these murders to justice and 3) evacuate all US personnel from Afghanistan as quickly as possible (not leaving anyone behind to become the target of revenge attacks).  Bring them all home now!