If I had to describe Liberals in a concise manner it would go something like this – Liberals are a group of people who like to generate solutions in search of a problem.

Obamacare will help people who can’t get insurance and lower the costs of insurance.  You know, so we can be more like Europe.

Raising taxes on the wealthy will end the class warfare and lower our deficit.

And now we have another.

On September 20, the Environmental Protection Agency (EPA) is scheduled to release its new regulations for constructing coal (and natural gas-fired) power plants. The buzz is that these regulations are more lenient than those EPA proposed earlier. Regardless, either version will deny U.S. citizens the right to have new generating facilities built using coal, the most abundant fossil fuel resource in the United States. The lower 48 states have several hundred years of coal available to supply our needs at current usage rates without tapping into even larger coal resources in Alaska.

And why is the EPA doing this?  Because they think the Earth is overheating and temperatures are rising solely because of the increased atmospheric CO2 concentrations (caused by humans).  <Sigh>.

It’s true, atmospheric CO2 concentrations have been increasing at a steady rate.

But let’s look at some graphs from 2 different sources of the Earth’s global temperatures (HADCRUT3 and UAH).

These graphs show the Earth’s global temperatures have been flat for the past 15+ years.

Now let’s look at the relation between atmospheric CO2 and these same temperature sets. 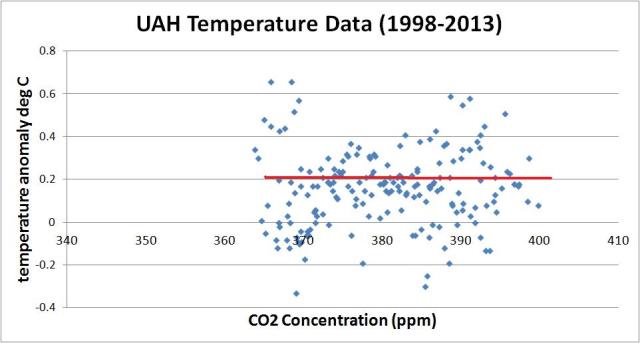 See that flat line?  That means as atmospheric CO2 concentrations have increased the global temperatures have been flat.  For 15+ years.

Solutions in search of a problem – That’s what Liberals do.

This entry was posted in Climate Change, politics. Bookmark the permalink.