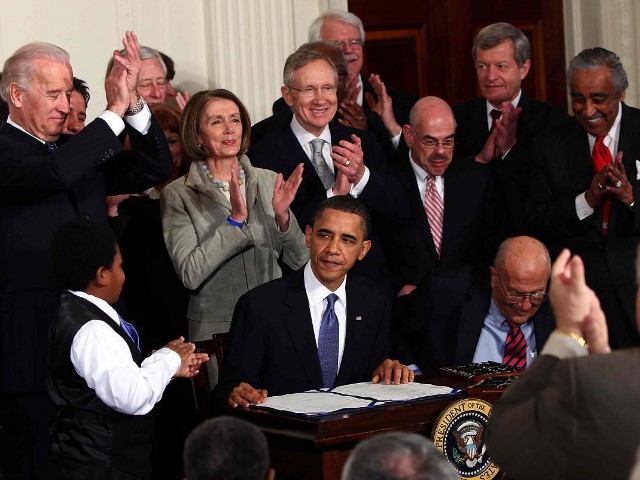 Over the weekend I heard a friend of mine defending Obamacare using this typical response:

“The United States is the only advanced Western country that doesn’t have a national health care system.”

Without specifically defining what countries are considered “advanced Western” and seeing which of these have national health care systems, I can’t definitively say this statement is correct but for the sake of argument, let’s say it is.  And I have a feeling it is correct since many of the major European countries do have socialized medicine to some degree.

It’s a fair argument and deserves a discussion but when I hear this statement, my reply is always – “Why do we want to be like Europe?” 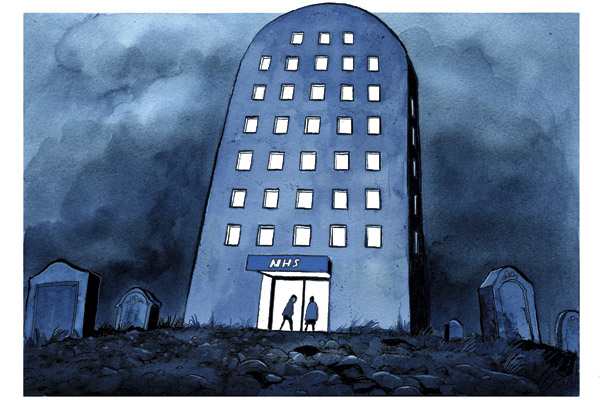 I’ve shown in a previous post where the UK’s National Health System (NHS) has numerous issues that were predictable under socialized medicine –  Hospitals that are in the red, wasteful spending, long wait times, patients travelling to other countries for surgeries and how private (wealthy) patients making bribes to move up the list.

Those reasons alone show why we don’t want to be like Europe but there is another reason against socialized medicine that will cause our healthcare quality to slip once Obamacare is fully implemented – medical innovations.

This research paper by the Cato Institute in 2009 showed the gap between medical innovations in the US versus the rest of the world.

“In three of the four general categories of innovation examined in this paper — basic science, diagnostics, and therapeutics — the United States has contributed more than any other country, and in some cases, more than all other countries combined.”

“In general, Americans tend to receive more new treatments and pay more for them – a fact that is usually regarded as a fault of the American system.  That interpretation, if not entirely wrong, is at least incomplete.  Rapid adoption and extensive use of new treatments and technologies create an incentive to develop those techniques in the first place.  When the United States subsidizes medical innovation, the whole world benefits.  That is a virtue of the American system that is no reflected in comparative life expectancy and mortality statistics.”

Here is a key graph from the study:

Nobel Prize in Medicine and Physiology Recipients by Country of Residence, 1969-2008 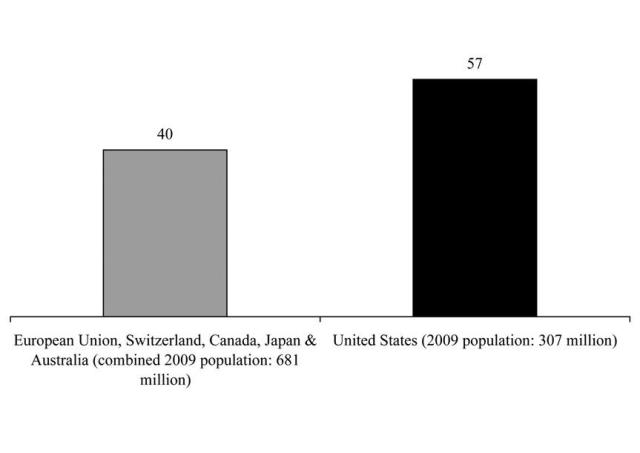 Another analysis from Forbes in 2011 showed:

You can see this represented in the following graph that has the number of biomedical research publications of each country per year from 2005 to 2009. 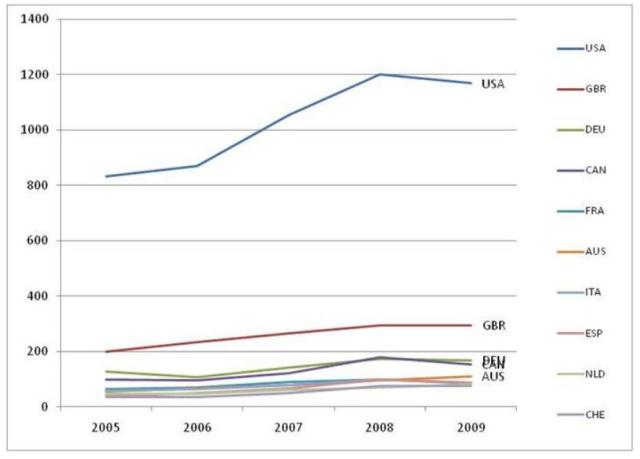 With increased government regulations and compensation from the nationalized system (aka Medicare), we can expect the US to drop to European levels of medical innovations.  There will be a larger risk-to-reward ratio for companies to finance medical trials and we can already start to see that the increased scrutiny by the FDA makes it even more difficult to get new drugs/devices approved.

Add on top of that the fact that many doctors are leaving the system, as was outlined by this excellent blog post by a cardiologist and electrophysiologist:

“Some doctors have leapt from the ship. More will certainly follow. Others remain silent yet quietly discontented; they do their job as just job now, marking time with little incentive for doing more. They have become the common workforce drone increasingly asked to do more by those who go home at 5pm and have no liability for the care they provide. More risk with less reward has been the mantra for care providers in health care reform. The stress is growing for everyone. Unfortunately, the doctors that leave will soon be back-filled by well-meaning young physicians with fewer hands-on hours of training that have been sculpted by an educational system dependent on tenured med-school professors complicit with our new progressive mindset.”

I don’t fault the doctors for leaving.  Medical professionals are now finding a more, not less, regulatory environment that limits compensation and bogs them down in bureaucracy.  All of this prevents them from doing what they are trained to do – care for patients – and if I was a medical professional close to retirement, I’d leave too.

We now have a new socialized healthcare system and regulatory environment that discourages innovation, frustrates medical professionals and ultimately will lessen our ability, as a nation, to bring products and procedures to the marketplace that will not only improve the lives of people in the US but around the world.

This entry was posted in healthcare, politics. Bookmark the permalink.

5 Responses to Why Do We Want To Be Like Europe?