Why Do We Have A Skilled Labor Shortage? 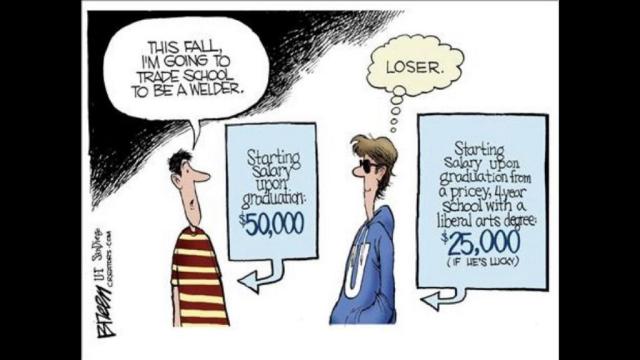 There is a serious job skills crisis in America right now.

“It’s a problem of supply and demand: There is a massive construction boom right now but construction workers are few and far between.”

“Largely fueled by the energy industry, tens of billions of dollars of development is in the works along the Gulf Coast and in the Midwest. This year there is almost as much construction work in energy boom states like Wyoming as there was in 2008.”

“But back then, there were about 6 million Americans working in commercial construction. Now, there are only about 4.5 million.”

“With roughly 20 percent fewer skilled workers in the construction industry, trade apprenticeships for young people are helping to ease the shortage. But it may be too little, too late.”

“Ron Kaiser, the vice president of Mike’s Electric, says he sees this play out on a daily basis.”

“Usually there’s people waiting and willing to come to work,” Kaiser says. “I’ve been with the business since ’99, and it’s the worst I’ve seen.”

“Mike Glavin, a senior manager with the Associated Builders and Contractors, an industry trade association, says that after construction took a nosedive six years ago a lot of skilled workers left the business, and they haven’t come back. Many of the workers that did stay were older, and now they’re starting to think about retirement.”

“If you’re a very highly skilled welder you can pretty much write your own ticket,” Glavin says.”

“But he says this has contractors concerned about the future. “Five to 10 years from now … the folks that they have are going to be leaving the industry, and they don’t necessarily see a replacement for those folks.”

Mike Rowe (host of the show “Dirty Jobs”) weighs in on this crisis:

“There is a real disconnect in the way that we educate vis-a-vis the opportunities that are available. You have – right now – about 3 million jobs that can’t be filled,” he says, talking about openings in traditional trades ranging from construction to welding to plumbing. “Jobs that typically parents’ don’t sit down with their kids and say, ‘Look, if all goes well, this is what you are going to do.”

After I tweeted out the cartoon above I found out that I’m not the only one concerned about this after skilled labor crisis.

@gdthomp01 @MikeintheCouv I learned how to weld and now work for an engineering firm.

.@DarrelDartez @gdthomp01 – Go to a construction site & look at the avg age of crane operators. Where's the next generation? ~$40/hr waiting

@MikeintheCouv @gdthomp01 I quit school as a music ed major and starting working offshore as a grunt making 40-50k a year.

@DarrelDartez @gdthomp01 – Yep…good wages to be earned. Too many ppl today afraid of some honest work, I think.

So how did this happen?

For sure, the push for a college education on too many people contributed to this.

As the Market is now showing us, there will always be a demand for skilled labor; be it electricians, welders, carpenters, crane operators or air conditioning repairmen. Over the past couple of decades we’ve seen college tuition rates skyrocket as the demand increased (more people wanted to go to college). Colleges had to raise costs to accommodate the increased student load but they could also raise prices because people were willing to pay for it. And now we see a whole generation of college graduates realize their bachelor’s degrees aren’t providing them the golden tickets that they were promised.

Many Millennials would’ve been better served with a 2-year technical degree or apprenticeship but they followed the herd to college and all they have to show for it is a six figure debt.

Don’t’ get me wrong. I’m a big fan of higher education and I had it drilled into my head that I was going to college and sure enough I did and the degrees I earned have contributed to my success. But college isn’t for everyone.

Those who were smart and decided to get the education that better suited their skill sets are now making huge salaries and can pretty much go wherever they want.

The Market rewards engineers, doctors and lawyers with high salaries because the training required to learn those skill sets is difficult and the pool of people who successfully make it through those education/training requirements is small. Likewise, learning how to be a welder, a plumber or a construction worker is also difficult and now that people have decided not to attempt training in these skilled labor fields, the pool of people qualified to do those jobs is very small and those jobs are delivering very high salaries.

The young people who were willing to put forth the effort to get trained in these skilled labor fields are reaping the benefits with higher than normal salaries and my hat goes off to them.

But there may be another element that is leading to this jobs skills crisis and that is Liberalism.

Leftists for the past 5 years have been preaching about income inequality, the need of the rich to pay their fair share and how wealthy people should share their wealth with the rest of us poor unfortunate souls. Government assistance is at an all time high level and the left is more interested in enabling people to stay on Government handouts than providing a business climate that incentivizes individuals to learn a skill and make a living in a rewarding profession.

Without the Government influence over the past 5 years, I feel that the Market would’ve corrected and provided the skilled labor that we need today. People would’ve been busy looking for work, going to a trade school and starting as an apprentice in a labor related job instead of sitting at home and waiting for their Unemployment benefits to be extended, their Obama phones and ‘free’ healthcare.

This entry was posted in economics. Bookmark the permalink.