I wrote an article for the American Thinker a couple years ago explaining the Greenhouse Effect and the role CO2 plays in it. An excerpt from that article is pasted below as background to this post.

The Greenhouse Effect is real and necessary for life on Earth. Without it, our world would be a frozen ball that would not be hospitable for life as we know it. The harmful stuff (x-rays and gamma rays) is filtered out, but the light in the visible spectrum enters, and that light energy warms our Earth. The land and sea then respond to that warming energy by emitting light in the spectrum of the infrared (IR), and that energy takes the form of small packets of energy called photons. When those IR photons reach the atmosphere, some of them get absorbed by certain molecules, and that absorbed energy is transferred into the elements of the molecules. That energy causes the molecules to vibrate and heat the atmosphere, and finally, the atmosphere transfers some of that energy back to the Earth’s surface. Again, this is necessary, because if we didn’t have this blocking of IR wavelengths, our average temperatures on Earth would be about 32 degrees Celsius cooler (-18ºC instead of the current 14ºC). One of the greenhouse gases (GHG) that reflects these IR wavelengths is CO2, but there are others, such as water vapor, ozone (O3), methane (CH4), and CFCs.

The science behind the Anthropogenic Global Warming (AGW) hypothesis states that increased amounts of CO2 in the atmosphere will block more of this outgoing longwave radiation (OLR) and increase the heat retained on the surface.  Periodically I graph the atmospheric CO2 concentrations and compare them to global temperature anomalies to see how that hypothesis is holding up.  Note that the global temperatures are listed in anomalies from a base time period so they’ll be plus or minus degrees Celsius instead of absolute values.

I look at two [2] well respected data sets to obtain the global temperature anomalies:  The University of Alabama Huntsville (UAH) and the Climate Research Unit (CRU).  The atmospheric CO2 data is obtained from NOAA website but uses the data from Mauna Loa which has been measuring CO2 concentrations (ppm) in the atmosphere since 1958.

The graph for CO2 concentration is shown below and you can see that there is a steady increase of about 3 ppm per year that is fairly consistent. 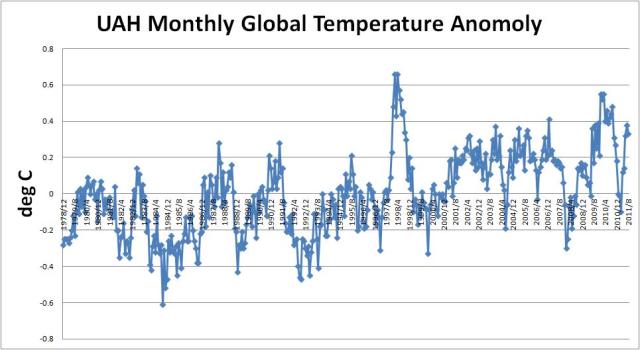 What you notice is that since 1998, while CO2 has been increasing, global temperatures have remained flat.  You can see this clearer when I change the X-axis to start at 1998 and run through current data in 2011.

So what does this tell us?  Does this mean that once CO2 concentration is saturated it doesn’t impact the Greenhouse effect (it can’t absorb any more OLR)?  Are there other variables in our climate that are driving temperatures besides CO2?  Were there other variables driving global temperatures and now they have subsided?  These are all good questions and ones that I hope the Climate Science community addresses.

16 Responses to Temperature and CO2 Update