This is How Liberals Think

Greg Sargent wrote an article for the Washington Post entitled “Debunking the Conservative Arguments about the rich and taxes, in three easy charts” and his conclusions show us how Liberals think.

His first chart acknowledges what many Conservatives have known for a long time – The richest 1% of Americans has seen their share of the total income tax revenue rise over the past 20+ years. 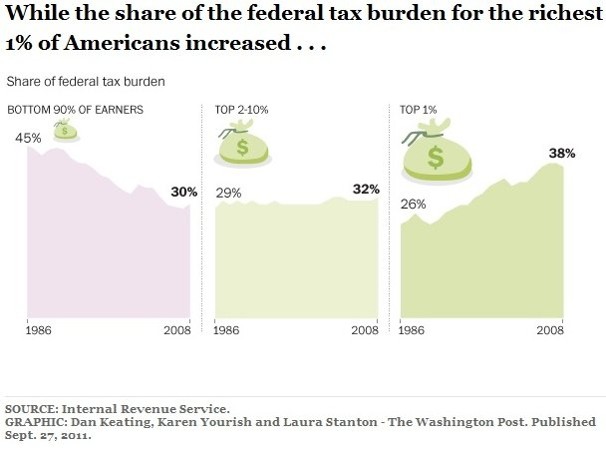 But then he tries to spin this by showing his second and third charts here.

The income of the bottom 90% has only risen 4% over the past 20 years.   What can we do to get their income level up?

It is not surprising that the income increase (119%) and income tax increase (54%) for the 1% are not equal.  The top 1% makes a majority of their money in stock which is taxed at a much lower level than payroll income.  This study stopped in 2008, just after stock market and housing market collapse, and during the time between 1986 and 2007 the stock market provide a great deal of wealth for many who had the courage to invest and reap those rewards – see chart here.

While the bottom 90% had a very small income increase (4%), their income tax dencrease (-30%) was much lower proportionally.  This is most likely due to the fact that more people are in the lower income groups that either pay very few taxes or none at all (from the 2009 IRS tax data, those making less than $30,000 paid less than 2% of all income taxes collected).  We could also deduce that those living in poverty (which is defined as a family of four making less than $22,350) have also increased which would add to the number of people that pay no income taxes.  We should investigate why the number of people living in poverty in the US is increasing and this graph does indeed show that the number of people in the US who are in poverty has increased over 30% from 1986 to 2009.

I’ve dealt with the Income Inequality meme of the Left here and also showed that poverty rates increase when Welfare spending increases.  For those who care to dig into the details and history, it is obvious that Liberal policies which are publicly stated to help the poor are really designed to hurt them.

But how does a Liberal react to these charts?   Mr. Sargent’s quote is below (emphasis mine).

So, look, here’s the disagreement in a nutshell. Conservatives say we should not raise taxes on the rich because wealthy people are already paying a disproportionate share of the tax burden. Liberals respond that the wealthy’s after tax income has exploded at a far greater rate than their rate of taxation has risen. Liberals are proposing only a tiny adjustment in that trend, as part of a broader solution to reduce the deficit that would also involve those of much more modest means making sacrifices.

So when a liberal looks at these charts they make the claim that the rich should pay more taxes and this conclusion gives great insight into Liberal Group Think.  Instead of posing solutions to increase the wealth of the bottom income groups they snap to decreasing the wealth of the rich.  I thought the American Dream was defined as working hard, making good decisions and taking calculated risks so that our income and wealth would increase.  Where is the motivation to do just that when the Liberal response is to punish those who succeed?

4 Responses to This is How Liberals Think