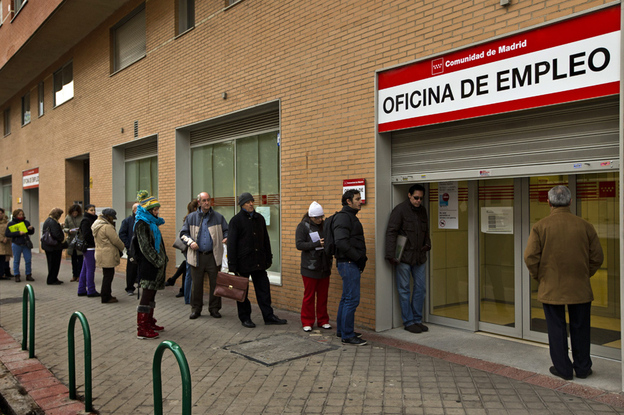 When future Historians write about the demise of the United States, they will marvel at the vast evidence hiding in plain site that should have warned us about adopting destructive Leftist policies.

England and Canada went down the path of Socialized medicine long before we passed Obamacare and their warnings can be found here and here.  Yet we ignored them.

Today, from NPR, we have a further warning about our pending collapse if we continue to increase the role of Government and reduce the role of the Private Sector.  The story is based in Spain and points out the juxtaposition between an over employed Public Sector and a Private Sector that has an unemployment rate of 25%.

“When Spain’s economic crisis hit, the private sector immediately started shedding jobs and cutting wages. New labor reforms have made it even easier for companies to do so, and unemployment now tops 25 percent.”

“They have had their wages frozen. Hiring has been frozen. But it’s not the kind of severe adjustment you’re seeing in the private sector,” Allard says. “You hear people say, ‘Wait a minute! In my company, we’ve cut all of our costs 30 percent. What’s their problem? We’re doing this, why can’t they do it?’ “

I don’t think the US wants to end up with unemployment rates in the mid 20’s so let’s take a look at how Spain got to this poor predicament.  From the NPR article, there are two main reasons for Spain’s woes.

“One reason is the civil service’s strong union contracts; another is the sheer number of civil servants in Spain. Bureaucrats, doctors, teachers and other public workers amount to 2.6 million people, more than 11 percent of the population. That makes politicians think twice about crossing them.”

Michigan and Indiana are the latest states to vote for Right-To-Work legislation and while this is a small victory, Unions still have way too much power in the Midwest, California and the North East.  We must recognize that these outdated dinosaurs are destroying business (and our children’s education) and must be limited.

We can keep shipping jobs overseas and feeding fat cat union bosses or we can recognize we live in a global economy and adjust accordingly.  There isn’t much time left.

“Spaniards also have a different attitude toward the state. The Pew Research Center recently found that while 6 in 10 Americans say they want to be free of interference from the state, more than 6 in 10 Spaniards say the opposite — that it’s the government’s job to make sure nobody is in need.”

When a country’s culture changes to the point where a majority of people think the Government exists to give them things, the country is lost.  As the blog, Two Heads Are Better Than One, pointed out here, once that culture shift happens, there is no quick fix.  The reelection of Obama and other Leftists who tickle the low information electorate with anti-business/class warfare memes and promises of increased entitlement spending has shown me that the US has crossed over to the point where a majority of voters believe the government exists to provide freebies.

Spain believes that their hope resides with their Government and look how that has worked out for them.  Do we think the US will fare better if we follow the same path?