It’s been 15 months since I reversed my Type 2 Diabetes by slowly adopting a Paleo lifestyle and there are a couple of items I’d like to write about. 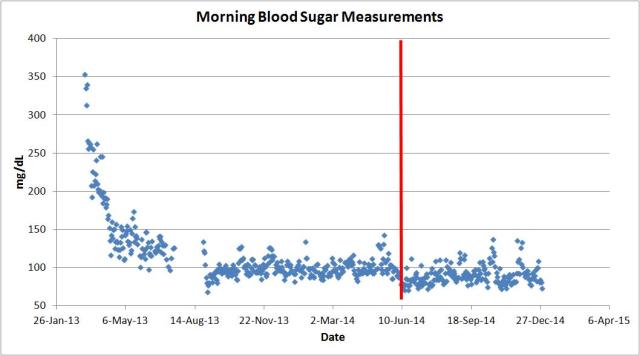 For those new to my blog, you can see how bad my Type 2 Diabetes was in early 2013 (fasting measurements in the 350 mg/dL range) and how the medication (Janumet) brought them down in the 120 mg/dL range but then dropped to a high normal range once I went off the medication and started the Paleo adoption in September 2013.

My morning blood sugar measurements averaged 100.4 mg/dL from September 2013 until June 2014 (which is considered high normal) but then dropped to an average of 90.4 mg/dL after June and this measurement is considered normal for someone who doesn’t have Type 2 Diabetes.

I still can’t explain what caused this shift as there was no change in my diet or exercise routine around that time frame but I think my body finally responded to the months of slowly transitioning to a full Paleo lifestyle and my insulin sensitivity improved to the point where my average morning blood sugar measurements are indistinguishable from someone who doesn’t have Type 2 Diabetes.

One of my favorite breakfast foods, pancakes, had to be eliminated once I adopted the Paleo lifestyle (grains are off limits on the Paleo diet) but eventually I substituted almond flour pancakes and this somewhat satisfied my cravings for this wonderful breakfast comfort food.

For three straight days I ate a breakfast that consisted of 2 almond flour pancakes (1 cup of almond flour, 1 egg, water, cinnamon and nutmeg), 3 eggs, 3 sausage patties and ¼ cup of real maple syrup on the pancakes. Note that I didn’t use the standard grocery store maple syrup that is loaded with high fructose corn syrup – I used REAL maple syrup with no additives (For those interested, I used this one).

I took my blood sugar measurement 2 to 3 hours after each of these breakfast meals and I’m happy to report that they were NORMAL – 108, 82 and 94 mg/dL respectively.

Was this due to my body’s improved insulin sensitivity or due to the fact that I ate NATURAL sugars and not processed ones? Probably a little of both, but I’m just happy to report that I can now enjoy one of my favorite breakfast foods again!

If you are looking to improve your health in 2015, I wholeheartedly suggest you read up on the Paleo lifestyle (start here) and give it a shot for 30 to 60 days.