NPR had a story today on the future of coastal flooding and they interviewed William Sweet from the National Oceanic and Atmospheric Administration.

The money quote is here (emphasis mine):

“Sea level is changing and it is going to keep changing regardless of who or what is causing it,” Sweet says. “And the impacts are going to become more and more frequent and severe and we’re going to have to deal with it.”

“Sweet and his NOAA colleagues agree with the majority of ocean scientists — that if climate continues to warm, average sea level will continue to rise by as much as 2 feet more by 2050. That’s because a warmer ocean expands in volume. Also, landlocked snow and ice will melt into the ocean. Sea level rise is higher on average along the Eastern Seaboard than most parts of the world because of wind and ocean circulation patterns in the Atlantic.”

“If Climate continues to warm….”

16 years of no warming and reporters continue to allow ‘scientists’ to peddle these lies without even the tiniest bit of a challenge to their claims. 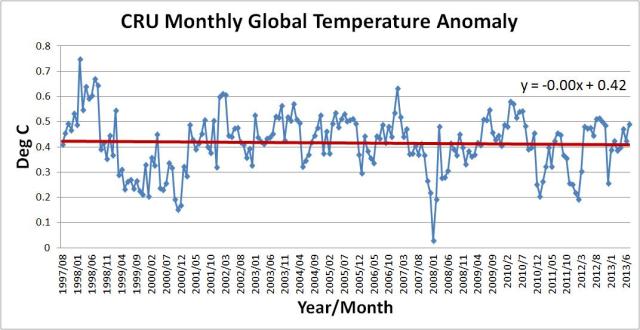 This data is easily available to anyone with an internet connection and Microsoft Excel but that’s apparently too difficult.

But then again, Leftist ‘journalists’ don’t have an incentive to debunk these claims.